From Houston to Inishowen, we are feeling the effects of rising temperatures 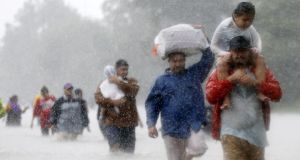 Residents wade through floodwaters in Houston, Texas, US, this week. Photograph: Jonathan Bachman/Reuters

The US National Weather Service is not noted for alarmist pronouncements. So when it tweeted that Hurricane Harvey was unprecedented and that “all impacts are unknown and beyond anything experienced”, it became clear that we are fast moving into a dangerous new climatic era.

On the other side of the Atlantic, Ireland again felt the latest lash of extreme weather with the sudden deluge that caused havoc on the Inishowen peninsula, in Co Donegal. Met Éireann labelled it a “once in a 100 years” event and pointedly avoided discussing any possible climate component.

Already the cost to Irish taxpayers of flood defences has increased tenfold, to between €400 million and €500 million a year

But the University College Cork climatologist Dr Kieran Hickey says that “phrases like ‘once in a 100 years’ to describe these extreme events really need to be retired”. In the past decade or so, he calculates, Ireland has experienced an extreme weather event, on average, every six to eight months – an astonishing four- or fivefold increase compared with Irish weather several decades ago.

Although there is no doubt the Donegal deluge was a freak event, “if we were to do an in-depth analysis,” he says, “I suspect we would detect a climate-change element in terms of its severity.”

ClimAtt, a UCC and University of Oxford project that Hickey is involved in, alongside Prof Myles Allen of Oxford’s Environmental Change Institute, will spend the next two years, with funding from the Environmental Protection Agency, assessing the role of human influence on climate in recent extreme weather events in Ireland.

Minister for Climate Action Denis Naughten acknowledges that “severe weather events like the ones we’ve seen in Donegal are going to happen more frequently”. He added this week that “funding would need to be put in place to deal with the colossal costs of repairing the damage after every new extreme weather event”.

This event is unprecedented & all impacts are unknown & beyond anything experienced. Follow orders from officials to ensure safety. #Harvey pic.twitter.com/IjpWLey1h8

Naughten is notably less sure-footed when it comes to the politically thorny issue of taking on the domestic carbon polluters that are actually helping to fuel this surge in extreme weather.

Already the cost to taxpayers of flood defences has increased tenfold, to between €400 million and €500 million a year, over the past decade, and this figure is set to continue to spiral.

Dr Hickey warns against the belief that there are engineering solutions to climate change: “We could spend billions on adapting our infrastructure to climate change,” he says, “but since the baseline keeps shifting we don’t know what we need to adapt to.”

As for tackling the emissions that are fuelling dangerous climate change, he adds: “We are failing miserably. We’re not being led politically.”

The Office of Public Works is the Government agency with key responsibility for flood-risk management. It is, in the view of the Maynooth University climatologist Dr Conor Murphy, “the most climate-engaged organisation in the country”. Given the number of State agencies, including Bord na Móna (“Naturally Driven”) and Bord Bia (“Origin Green”), that engage in corporate greenwashing, the bar for success in this context is quite low.

The OPW is moving towards a risk-management approach to future weather extremes. What this means in practice is looking at worst-case scenarios and then assuming that particular extreme events could be 20 per cent worse than even the most pessimistic modelling scenarios.

Although the do-nothing advice of an active group of Irish climate contrarians may hold sway with some politicians, media and lobby groups, the OPW and other front-line experts can see the fatal folly of playing wait-and-see.

Against the shifting backdrop of ever-escalating climate change, however, no amount of planning can offer a panacea against future catastrophes. Flooding is almost certainly Ireland’s chief climate vulnerability. For every degree of temperature increase, the atmosphere can hold 7 per cent more moisture. We are already having to cope with a supercharged atmosphere. Unabated, this can get much worse, much sooner than many people may realise.

As the OPW points out, every major Irish city and town is either by the coast or next to a large river, which means we are extremely vulnerable both to monster floods and to the equally dangerous threat posed by a rising sea level and storm surges.

Although the ultraconservative Intergovernmental Panel on Climate Change projects that the sea level will rise by up to a metre by 2100, one of the leaders of its working groups, the Stanford University and Carnegie Institution for Science professor Chris Field, told a conference in Dublin that it would in fact be prudent for Ireland to plan based on an enormous two-metre rise this century.

As Texas drowns, more than 1,200 people across Asia have already been killed in the worst floods in decades. Ominously, wildfires have this summer swept areas of Greenland as well as deep into the Arctic Circle.

“This idea that climate change is just something taking place in other parts of the world needs to change,” Dr Murphy adds. “It’s also happening right here, right now.”