Opinion: Tax on fizzy drinks will not deflate obesity problem 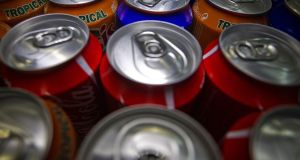 So we will have a sugar tax. Or more specifically a tax on fizzy soft drinks. It is in the programme for government. It’s politically popular, it’s acceptable to the electorate and it is backed by national and international expert opinion.

I use the word expert cautiously. These are usually experts in various medical disciplines from endocrinology to cardiology and specialists in public health. But they are not experts in the field of nutrition, and of the dozen or so professors of nutrition on this island I know none who expresses support for such a tax. Why is this?

My explanation is that certain questions trip off the tongue of nutrition experts that prove a tad too awkward for the non-expert. So let me go through these questions to try to explain why such a gulf exists between those for and those against – or at least questioning – a sugar tax.

Firstly, if you look at the data around national food intake you see that in terms of foods with added sugar it is the contribution of table sugar and jams that is usually the main culprit in driving high intakes. The quantity contributed by carbonated sugary beverages shows little variation as a proportion no matter how great or small a person’s sweet tooth.

So where is the risk-assessment report that looks at all sources of added sugars and, taking everything into account, opts to focus solely on sugar-sweetened beverages for taxation? None exists.

We are taxing such carbonated soft drinks because it is a global fashion built on dubious science and popular prejudice.

Among Irish adults, about half the population does not consume sugar-sweetened beverages. Among those who do so, the average calorie intake from these products is about 35 calories a day.

If the increased tax on the fizzy drink consumer reduces caloric intake by 35 per day, will they lose weight? No they won’t. That’s just not how the body works.

The body defends its prevailing weight vigorously, which is why conscious weight loss through dieting is so hard to maintain. Sneaking 35 calories a day from the diet leads to compensation through higher intakes of other sources of calories.

Some people say if those calories come in liquid form – such as soda pop – the body does not need to compensate. Well, does it or doesn’t it? Where on this island do I find a considered argument about these assertions? Once again I don’t because this taxation policy is simply following a global fashion. And remember the wisdom of the cautionary tale about fashion, when the emperor was found to have no clothes.

The hardest question to ask the pro-sugar tax lobby is the most obvious and yet again I know of no document on this island that attempts to provide its answer.

That simple question is: what would constitute a success? Would a lower post- tax intake of soft drinks among soda consumers be one possibility? That was certainly the measure used by the Mexicans in their high-profile taxation policy.

What does it matter if soda intake falls but obesity among consumers of soda doesn’t? Wouldn’t that just spoil the party? Or maybe I’m wrong and it is obesity prevention, not obesity treatment, that is the target.

Nobody in the pro-sugar tax lobby has set out criteria against which success might be measured – nor the time scale of its attainment. So long as the outcome is muddy and fuzzy, the focus is solely on getting the tax operational.

In taxation the proceeds don’t always go to the area from where the tax was raised. We have a road tax and a road spend. We have a Garda spend but no Garda tax so we pay our gardaí from general tax sources. So would the revenue earned from a sugar tax be used to fund some strategic initiative in healthy eating? An initiative that would complement the hoped-for but as yet uncertain success of the tax in weight management?

Well, today our soda tax stands at more than 20 per cent, which is the VAT already on these drinks, and nothing from this income is dedicated to healthy eating. Our airwaves have heard former minister for health Leo Varadkar suggest ring-fencing this new revenue, with the Minister for Finance in response foreseeing all the possible precedents that such a move would create for national finances. Once again the future is fuzzy not fizzy.

A final argument put forward by the pro-tax lobby is that a sugar tax would raise awareness in the public as to the dangers to health of excess weight and presumably a greater awareness in its alleged association with sugar. How naive. The whole world knows that excess body weight is bad for health so the awareness quota here is more than attained.

However, we know that those who are overweight don’t see themselves at any health risk. Distortion of self-analysis of weight-related problems is endemic. In effect, they are a defence against their personal weight challenge. Thus increased awareness of obesity through a sugar tax is nothing short of useless.

So, why not let this tax go ahead?. It might do some good, maybe not as great as many articulate. But it can’t do any harm.

My response is that it will do massive harm. It will allow policy-makers and Ministers off the hook of really tackling obesity through long-term investment in an agency with some independence that can make inroads into our weight crisis.

Single-issue solutions are cheap, easy and populist options, and in the long term will be of no help to us.

Imagine if, as Mexico did, that we introduced a sugar tax and 18 months later faced a return to pre-tax soda intakes as recently reported by the Wall Street Journal? Public health nutrition credibility would be set back decades. I’m not willing to take that risk and certainly not even willing to consider it without a detailed national analysis of all factors involved. But I know who will win – and I know who will be pointing at the plump emperor’s new clothes. Mike Gibney, professor of food and health at UCD, is the author of Ever Seen A Fat Fox? Human Obesity Explored, published by UCD Press