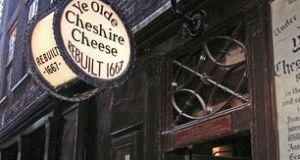 “Samuel Johnson’s links with the place are so well advertised as to have attracted a pantheon of other writers since, including Dickens, Twain, and even WB Yeats”

Ye Olde Cheshire Cheese sounds like a makey-up name for an English pub – the sort of thing you’d expect in a theme park.

But the London establishment so titled is of genuine antiquity. It doesn’t even have to boast of its 16th-century origins on Fleet Street. The signs mention only that it was “rebuilt in 1667”, leaving the history-minded to work out that a predecessor was destroyed in the Great Fire a year before.

The current version was long famous for its “puddings” and indeed for a “Pudding Season” that began, with some ceremony, every October. The puddings were pies, more or less. But “ye famous pudding”, as an old menu still records, was an extraordinary concoction of “steak”, “kidney”, “lark”, and “oyster”.

These were all mixed together in one enormous, crust-covered pie, to be shared out among diners. And according to one account, from 1913, the monster had to be “boiled for 17-and-a-half hours”, before being carried from the kitchens by “three men and boy”.

When I dropped into “The Cheese” earlier this week, alas, ye famous pudding was not an option. I had to settle for a steak and ale pie, of proportions modest enough to be carried to my table by a solitary barmaid, in one hand. Nor did I get to sit on Samuel Johnson’s favourite seat, although there’s some doubt as to whether he ever sat on it either.

At the opening of the 1926 pudding season, one of the guest speakers, Lord Birkenhead, who was so seated, expressed scepticism that Johnson’s posterior had ever graced the spot.

His reasoning was that in the earlier part of career, the great lexicographer was too poor to frequent taverns, and in the later part drank nothing but tea – a lamentable habit, thought Birkenhead, that had accelerated his death from dropsy.

Boswell’s life of Johnson doesn’t mention The Cheese either. So the pub must rely on oral history and, not unreasonably, on the fact that Johnson lived very close by, behind the premises, so that he could hardly have avoided it.

In any case, his links with the place are so well advertised as to have attracted a pantheon of other writers since, including Dickens, Twain, and even WB Yeats, who didn’t care for pubs much, but held meetings of his Rhymers’ Club there in the 1890s, where they drank, smoked clay pipes, and recited their work.

Another celebrated performer in the pub around that time was an African Grey parrot named Polly. The bird was in the habit of repeating things heard from customers, some of them rude. And according to a contemporary newspaper cutting on the wall, this was a cause of concern in 1919, when Princess Mary dropped into the pub.

She had been opening a women’s club next door (in rooms once occupied by Oliver Goldsmith) and wanted to see the celebrity parrot. The bird was duly presented, and perhaps from nerves, but in any case to the manager’s relief, refused to speak in her presence.

When the parrot died in 1926, it was the subject of many obituary notices. But it doesn’t appear to have earned a statue, unlike Samuel Johnson’s cat Hodge, who has his own monument on Gough Square, outside his master’s house. Of course, unlike the pub, Hodge was mentioned by Boswell, whose quotation of Johnson calling the animal “a very fine cat indeed” is reproduced on the inscription.

Another biographical detail on the memorial is a pair of empty oyster shells beside the cat.

Johnson used to feed him oysters – not an extravagance then, when they were a poor man’s food – and always bought them himself, lest the errand demean his manservant, a freed Jamaican slave.

But never mind the statue, the cat nearly earned an even rarer tribute – becoming a character in a Samuel Beckett play. Called Human Wishes, it was mainly about the relationship between Johnson and Hester Thrale, an author and diarist. In the event, Beckett abandoned it after the first act (which the character named Hodge slept through), although it foreshadows the style of later works, including Waiting for Godot.

The young Beckett had a fixation with Johnson. It may in part have related to their mutually gloomy temperaments. As well as having an actual black cat, Johnson was followed around by the figurative “black dog”. And this might have been another reason for him to avoid The Olde Cheshire Cheese. Among the pub’s marks of authenticity is its 17th-century lack of windows. It was brilliantly illuminated once (in 1666), but hasn’t seen much light since.