The rise of Islamic populism was the price of more democracy 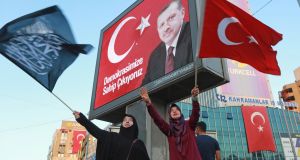 Everybody in Istanbul seemed to be quoting Recep Tayyip Erdogan’s famous remark about democracy being a train you get off once you reach your destination. Photograph: Adem Altan/AFP/Getty Images

Opposite Istanbul, in the Sea of Marmara, there is an archipelago of small islands which is one of the most picturesque places in Turkey. In the 19th century, the Princes’ Islands were the holiday retreats of the wealthy Istanbul elite. There are few cars permitted and transport is mainly by horse-drawn cart. The main island of Buyukada has Ottoman mansions, beautiful Greek churches and monasteries, synagogues and mosques, reflecting the multicultural nature of old Istanbul.

There, on the seafront, you will see little groups of old ladies in twinsets, pearls and perms playing cards at cafe tables in the shade. It could be New York’s Upper East Side, except instead of Yiddish-tinted American, these ladies are speaking Turkish-tinted Ladino, a dialect of Spanish brought here by the refugees from Catholic Spain in the 16th century.

These Jewish refugees thrived in the Ottoman Empire, under the Sultan’s so-called dhimmi system, whereby religious minorities were protected and allowed to self-regulate.

Visiting Turkey a few years ago, I was invited for tea by one of those old Istanbul families. These were very much the Istanbul professional elite, cosmopolitan and cultured, educated in the French lycée, living in a sprawling house in the centre of Istanbul, commuting to other homes in Paris, New York, and Tel Aviv.

The grandmother of the house, an elegant grande dame in her 90s, lamented in her perfect French, how the neighbourhood had been going downhill.

She told me indignantly that she had been having coffee at her favourite local cafe, when two girls had sat down at a nearby table, wearing headscarves! I had to suppress a smile. These people’s position reminded me a little of the plight of the Anglo-Irish after independence.

I thought of Elizabeth Bowen’s famous complaint, that the doors of her birthplace, Herbert Place, were now festooned with brass plates bearing Catholic names.

The fact is, no elite, no matter how cultured, can be expected to enjoy giving up power. But I was soon to be less amused. I made some banal remark about the prospect of Turkey joining the European community, and the progress of democracy in Turkey.

Smiling at my visible surprise, he continued. “If we have democracy the majority of people will vote for Islamic populism. And once in power . . .” he trailed off, with a shrug of the shoulders. But he didn’t need to finish the sentence.

Everybody in Istanbul seemed to be quoting Recep Tayyip Erdogan’s famous remark about democracy being a train you get off once you reach your destination.

Nevertheless, I took all this with a pinch of salt. As a typical European liberal, I failed to see how democracy could be so bad in itself, and surely Turkey’s institutions were strong enough to withstand any demagoguery. I felt that the elite, like my friends, were suffering from paranoia.

Mustafa Kemal Ataturk, the founder of modern Turkey, had dealt decisively with the problem of religion in the state. Born and raised in that other great multicultural city of Salonika, he had received a secular education in the famous school of Semsi Effendi and he had been determined to make Turkey a secular republic.

It is well-known that Islamic State is attempting to set up a new caliphate. Less well-known, however, is that the restoration of the caliphate is a stated objective of many other Islamic movements, even supposedly moderate groups like the Muslim Brotherhood. Can such objectives be tolerated in a secular, democratic state? It is no secret that Erdogan is less than respectful of Ataturk’s legacy, even referring to him as “a drunk”. After the recent failed coup, Erdogan was filmed making a speech to his followers on the steps of a mosque after Friday prayers. His message could not have been clearer.

Just how far is Erdogan going to go in bringing his religion into politics? Will my Istanbul friends’ worst fears be realised? What happens next in Turkey is of vital importance, not just to them, but to the societies of western Europe struggling with their own religious minorities.

Michael O’Loughlin is a poet