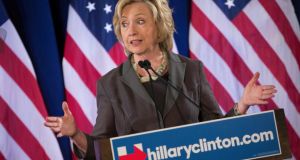 “We don’t have to talk politics or get too serious,” she said. “I just want to know what’s on your mind”. Above, Democratic presidential hopeful Hillary Rodham Clinton. Photograph: Michael Appleton/The New York Times

Hillary Clinton keeps asking me for money. In fact, I am beginning to think that it is her only interest in me. About three months ago I registered my email with her campaign website and ever since its been “donate, donate, donate”. When she is not asking me to donate she’s pestering me to buy something.

It started on May 30th when she sent me a discount voucher for 10 per cent off “Hillary pantsuits”. I decided not to purchase. I could also use the voucher for “A Woman’s Place is in the White House” cushions but I don’t need any of those at present either.

A couple of days later, I got an exciting email promising a free trip to meet Hillary at her campaign kick-off in New York. There was a catch, however: I had to sign up for a draw “to be in a with a chance” of winning the trip.

Two days later I got another message reminding me that if I “chipped in” I could still be in the draw to meet her in New York. Prominent again in this email were click buttons to donate in various amounts from $5 to the legal limit of $2,700.

A little while after that I had a nice email from John Podesta, no less. Podesta was President Bill Clinton’s White House chief of staff from 1998 to 2001 and he now chairs Hillary’s campaign. “Dear Noel,” he wrote, “Are you with Hillary? If your answer is ‘you bet I am’,” then he hoped I’d donate $1 “right now” to take her campaign “to the next level”. There was an urgent, almost desperate tone to his pleading.

On June 13th, they sent me a link so that I could watch the speech at her campaign launch live. The next email was from the Hillary Clinton Shop letting me know about a cute T-shirt they have for girls with the words “official T-shirt of presidents in training” on them.

On June 20th, Hillary herself again sent a message saying that if I chipped in $10 or more, her people would ship an official Hillary fridge magnet to me for free. A week later, the Hillary Shop was back offering to sell a Hillary Clinton beach towel.

In mid-July, Podesta dropped me another line saying that Federal Election Commission reports showed Republicans were out-raising the Hillary campaign four to one. “If we win the Democratic nomination for president and this pace keeps up, we are in for a ferocious onslaught of dark money, regardless of who the nominee is on the other side.”

Podesta reassured me that they running “a different kind of race” by which presumably he means different from the Republicans. More than 250,000 people, he told me, had at that stage chipped in $1, $5, or $10 because “they care enough about this election to have a financial stake in it”, implying I didn’t care because I hadn’t donated.

Then I got an incredible offer. Hillary emailed to say that if I gave her campaign more contact details I would be entered for the chance to be flown out, with a guest, to have dinner with her on the campaign trail. “We don’t have to talk politics or get too serious,” she said. “I just want to know what’s on your mind.”

I can’t imagine having dinner with Hillary Clinton and not talking politics but it sounded wonderful either way. She told me that her campaign would take care of my travel and accommodation “so you can relax and enjoy our time together”.

Hillary’s most recent email showed me an official limited edition Hillary for America Supporter Card and promised that if I chipped in $1 they would drop my card in the mail.

I finally felt I had to break the bad news to her. I sent Hillary a reply email last night telling her that even if I still wanted to I can’t actually donate because I am resident outside the US and am not a US citizen.

I hope she won’t be too upset. According to the latest published Federal Election Commission filings, her primary campaign had raised a record $46 million by the end of June.