Noel Whelan: This is no time to indulge in loose talk about elections 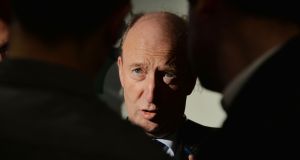 Minister for Transport Shane Ross has clearly decided he wants to be remembered for doing part of the Minister for Justice’s job, rather than doing anything substantial in his own department. Photograph: Alan Betson

There is a real risk that if sense doesn’t prevail soon our politicians will huff and puff their way into a premature general election.

Readers would be forgiven for wondering why all this talk of Leo Varadkar rushing to the polls has suddenly emerged and why even some commentators are egging him on. The frenzy is fed in part by trouble from or within the Independent Alliance.

It had been presumed that the Independent Alliance Ministers had settled down after the negative reaction to their notion of a peace initiative with North Korea earlier in the year. Now, however, Shane Ross and his crew are back in the news and again for the wrong reasons.

When going into Government the Independent Alliance had five TDs but were allotted only four ministerial offices. They solved the problem by dividing up one of the junior ministries between Seán Canney and Kevin “Boxer” Moran on a rotational basis. The two decided on the toss of a coin that Canning would be a Minister of State for the first year and Moran for the second but peculiarly they made no arrangement about what would happen after that.

Now Canney expects to rotate back into office but Moran, with the support of his other colleagues in the Independent Alliance, is staying put.

Canney went to ground this week and apparently we may have to wait until the middle of next week to hear whether he is going to suck it up or break away from the Independence Alliance altogether. This tale has all the shenanigans and self-absorption of a Jeffrey Archer novel. This unseemly squabble does no credit to the role of these Independents in Government or to politics generally. It threatens not only the internal harmony of the Independent Alliance itself but could erode further the precarious parliamentary arithmetic on which this Government relies to survive. Meanwhile the tensions between the Independence Alliance and Fine Gael over judicial appointments also resurfaced this week. The issue is one of some importance although not one of pressing relevance to the lives of ordinary citizens. It touches on the sensitive constitutional boundaries between the judiciary, the Government and the Oireachtas.

It simply becomes untenable for a minister for justice, every time he has to come to Cabinet with a necessary judicial appointment, to be faced with a veto from another individual minister

The Minister for Transport has clearly decided he wants to be remembered for doing part of the Minister for Justice’s job, rather than doing anything substantial in his own department.

While reports of Minister for Justice Charlie Flanagan having threatened to resign before Tuesday’s Cabinet meeting have been denied one could well understand why he might have found himself in such a position.

It simply becomes untenable for a minister for justice, every time he has to come to Cabinet with a necessary judicial appointment, to be faced with a veto from another individual minister.

Those tensions are unlikely to dissipate. Even after this week’s appointment of a new president of the court, the Court of Appeal is still two members short of its standing number of judges and a couple of more vacancies arise there in the coming months. The court struggles to reduce a massive backlog of cases it inherited from the Supreme Court when it was established four years ago.

Meanwhile the temperature appears to be rising between Fine Gael and Fianna Fáil. It can be difficult to discern whether the increasing volume of the rhetoric reflects the risk of an actual breakdown in the confidence-and-supply agreement or is merely more assertive posturing.

Fianna Fáil’s only other options would be a full-blown coalition with Fine Gael, which they have set themselves against, or a coalition government with Sinn Féin

Fianna Fáil is increasingly sour because it has had to straddle the challenges of leading the Opposition and keeping the Government in power. Fine Gael continues to resent its reliance on Fianna Fáil’s vote or abstentions.

Those Fianna Fáil TDs pressing for an election need to be careful what they wish for. The underlying realities reiterated in last week’s Irish Times Ipsos/MRBI poll militate against an election. Indeed all recent polls suggest that the more likely outcome of any early election would leave Fianna Fáil stuck again in another feeble confidence-and-supply agreement with Fine Gael in the driving seat.

Fianna Fáil’s only other options would be a full-blown coalition with Fine Gael, which they have set themselves against, or a coalition government with Sinn Féin to which they profess themselves strongly opposed.

For all its frustrations, the confidence-and- supply agreement is working better now than it was a year ago in terms of legislative output and policy achievement.

Brexit will demand full attention in the months to come. Politics has enough to do in tackling the housing crisis. This is no time to indulge in loose talk about elections.

The two main parties should let their three-budget agreement run its course till the end of the year. They should then take some months to reflect and to allow the Brexit endgame to be worked out. There is no need for an election before next spring or summer at the earliest.

1 Murder in a crowded house: The full story of the Patricia O’Connor trial
2 Coronavirus: Aer Lingus cabin crew in self-isolation after passenger’s positive test
3 Britain is uncomfortable because Ireland has the upper hand for the first time
4 Coronavirus: Myths that have gained traction
5 Joshua Allen jailed for 15 months for drugs offences
Real news has value SUBSCRIBE