Noel Whelan: The Government is ready for 2018’s challenges 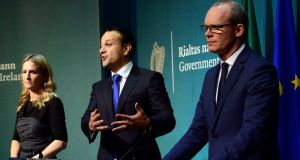 A year ago there was a sense that the Government was weak, tired and vulnerable. I wrote here at the end of December 2016 that the adjectives used most often to describe the Government, by both participants and observers, were “frustrating”, “inert” and “low energy”.

A lot has changed in 2017, especially in its second half.

The most striking change has been the dramatic generational shift. It is almost 99 years since our national political leadership was as young as our core Cabinet is at this moment. The children of the 1960s and early 1970s now hold sway in government and the Cabinet is more reflective of the electorate than it has ever been. Elements of the British media, and indeed some doyens of our own media, seek to deride the Taoiseach and his Ministers for their youth and inexperience but it is that very freshness that explains much of the surge in popularity they have enjoyed in recent polls.

It is also worth noting that we are now led by a Government of men and women for whom the trauma of the Troubles in Northern Ireland is unlived history. Many of them came of age politically in the ceasefire and peace process era. They are less inhibited about expressing their nationalist sentiments and unafraid to engage with both Britain and unionism on robust terms when appropriate.

The Government is also a good deal more stable than it was a year ago. One of the fault lines upon which the second Enda Kenny-led Government was built after the 2016 election was the unresolved Fine Gael leadership issue. After that disastrous campaign, Enda Kenny was always living on borrowed time and tensions within Fine Gael threatened the survival of the relationships with both the Independents and Fianna Fáil on which the Government depended. That vulnerability has now been removed.

While the change of leadership could have undermined the Government in fact it was positive both for Fine Gael and for the stability of the Government. It helped that there was an actual contest. The hustings throughout the country gave the process some transparency and some drama but it also helped the outcome was decisive. Some commentators talked up the potential for ongoing tension because Simon Coveney won the majority of votes among party members. There was never much substance to such talk and there is even less now that Coveney is Tánaiste. There is instead a sense that the Fine Gael leadership issue is resolved, perhaps for a generation.

Leo Varadkar as Taoiseach has been more decisive than his predecessor. In the Seán Lemass mode, he is not spooked by his lack of parliamentary majority but focused on getting things done and putting it up to others to stop him if they dare or choose. This is partly why there has been a marked improvement in legislative output from the Oireachtas in the second half of 2017, albeit off a low base.

This decisiveness has also led to better handling of Shane Ross and the Independent Alliance. There is less of a power vacuum for them to seek to exploit. Ross and his colleagues have also undermined their own position with talk of North Korean frolics and photo-stunts at Stepaside Garda station.

The confidence-and-supply relationship between Fine Gael and Fianna Fáil is also in a more robust state at the end of 2017 than it was a year ago. It came perilously close to sundering in early December because of the controversy surrounding Frances Fitzgerald’s emails. Having gone to the brink and survived, however, the relationship is more likely to withstand further crisis. Surely lessons will have been learned and mechanisms put in place to avoid a repetition of such unnecessary brinkmanship.

The other key shift is that Fianna Fáil has now even less to gain from causing an election than it had a year ago. The pattern of polling in the second half of this year has seen a consolidation in support for the two main parties. If it is to break out of its current predicament, then Fianna Fáil needs to engineer an election in which it not only gets more seats itself but in which it gets more seats than Fine Gael.

The risk for Micheál Martin is that the confidence-and-supply arrangement continues to work so well under Varadkar that the voters say “grand, we’ll have more of that so please”. While Fianna Fáil is likely to increase both its votes and seats, current polling also suggests Fianna Fáil would still be the smaller of the two parties and again be in opposition.

Having come safely through a Fine Gael leadership change and a potentially fatal political crisis the Government is now more stable than it ever was. As the German philosopher Friedrich Nietzsche first put it, “that which doesn’t kill you makes you stronger”.

1 Steve Coogan: ‘Come Out, Ye Black and Tans is two fingers to the British’
2 Ryanair’s Michael O’Leary under fire for comments on Muslim men
3 Coronavirus: Almost 60 new cases recorded in Italy as two die
4 Anti-Irish bigotry in Britain has not gone away
5 Tommy Tiernan: ‘I had to keep working to pay off my mortgage debts’
Real news has value SUBSCRIBE