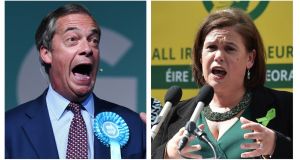 “Sinn Féin may find the backhanded compliment from [Nigel] Farage unwelcome but it is not the first time the two forces have found common ground.” Photographs: EPA/Getty

One of the longest running fake news stories in Irish politics is the canard that the country is about to be forced into a non-existent European army. Sinn Féin and a variety of other anti-EU campaigners have been proclaiming it since the very first referendum on membership in 1972.

That is why Mark Durkan, who is a Fine Gael candidate for Dublin in Friday’s election, was right to call out Sinn Féin on its misleading propaganda. The former leader of the SDLP is in a better position than most to challenge Sinn Féin having experienced how the party operates in the North.

I didn’t support bombing in this country, I haven’t supported it in any other country. Sinn Féin cannot say that

Durkan was one of the key figures in the SDLP’s long and courageous struggle to bring about peace and powersharing in Northern Ireland. Incidentally, he also voted against British military intervention in Syria and Libya when he was a Westminster MP.

He hit the nail on the head when he proclaimed last weekend: “I’m someone that’s never supported bombing. I didn’t support bombing in this country, I haven’t supported it in any other country. Sinn Féin cannot say that.”

Given that Sinn Féin not only supported but continues to defend the savage campaign waged by the Provisional IRA, while its political leadership still answers to shadowy figures, its pose of anti-militarism in the European Parliament is as brazen as it is hypocritical.

It is a fact that Ireland is participating in a new EU defence co-operation arrangement called PESCO which enables member states to co-operate on agreed projects such as training missions, military disaster relief capability, harbour and maritime surveillance, and a response mechanism to cyber threats. However, this is patently not a European army.

The spurious claim surfaced as long ago as the 1972 referendum campaign on EEC membership. “Irish people will be committed to whatever wars the European superpowers decide to wage. Neutrality will go and compulsory military service for our youth will be introduced,” said a Sinn Féin pamphlet. They are still beating the same hollow drum half a century later.

Sinn Féin’s more recent definition of itself as a Euro critical rather than a Eurosceptic party has been put in context by the fact that Nigel Farage’s Brexit Party is using clips from speeches by Mary Lou McDonald when she was a member of the European Parliament to support its European election campaign in the UK.

During the debate in the first referendum on the Lisbon Treaty in 2008 McDonald claimed it would give “powerful EU institutions a free hand to further militarise our union”. These claims helped to create a public mood which led to the rejection of the treaty by the Irish electorate the first time around.

Fianna Fáil European candidate for Midlands-North-West Brendan Smith, who has also tried to focus public attention on the long history of Sinn Féin’s anti-EU rhetoric, was right to suggest that that the Brexit Party’s use of McDonald’s speeches should not come as any surprise.

“For those who have listened to the party’s recent claims to be pro-European, the emergence of this video is a timely reminder of the real values at the heart of Sinn Féin,” said Smith who pointed that while the Lisbon Treaty was rejected by voters at the first time of asking, it was passed in a second referendum after legal assurances about Irish neutrality.

Sinn Féin may find the backhanded compliment from Farage unwelcome but it is not the first time the two forces have found common ground. Back in 2012 during the referendum on the EU Fiscal Treaty, which Sinn Féin strongly campaigned against, McDonald and Farage appeared together calling for a No vote in a national radio debate on Today FM chaired by Matt Cooper.

Incidentally, another bizarre link between the Brexit Party and Sinn Féin has become something of an election issue in the north of England. The controversial journalist Claire Fox, who tops the list of Brexit Party candidates for the North West constituency in England, is a former member of a Trotskyist group called the Revolutionary Communist Party.

That party was a strong defender of the IRA even after it had planted the Warrington bomb which killed 12-year-old Tim Parry and Johnathan Ball. When controversy developed after her selection as a Brexit Party candidate she contacted Parry’s father Colin to explain her position.

He later tweeted: “I give some credit to @Fox_Claire for having the gumption to call me today but the fact that she repeatedly refused to disavow her comments supporting the IRA bombing which took Tim’s and Johnathan’s young lives proves she hasn’t changed her original views.”

Fox may have moved from being a communist to a Euro candidate for a populist right-wing party but another thing that hasn’t changed is her virulent anti-EU views. It is no accident that the hard left and the populist right share the same animosity to the core EU values of tolerance, free trade and the respect for law. Both will do everything they can in the next European Parliament to undermine those principles.