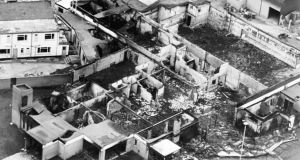 Every unionist party has welcomed the decision not to hold a full public inquiry into the 1989 murder of Belfast solicitor Pat Finucane.

The reason they have given, causing widespread nationalist offence, is that the Finucane case has received more money and attention than most other Troubles deaths. However trite that argument, it matters because it is probably the view of most unionist voters, which has in turn helped the UK government put the same view out in slightly more polished form. Northern secretary Brandon Lewis passed the buck to the PSNI’s general Troubles legacy process, in effect saying the Finucane family should stand in the same stalled queue as everyone else.

7 ‘Stardust took me over. It turned me into a victim too’

10 Ireland’s lost golf courses: What happens when the gates close?

11 Garda trauma: Sean was a garda for six weeks when he saw his first body

14 Teaching was Jerry Kiernan’s vocation; in 30 years he never missed a day

20 ‘I got a burning smell in my nose’: Third-wave Covid-19 patients share their experiences

24 Richie Power: ‘To me, Kilkenny’s problem is at the roots’

25 Covid-19 and travel: Quarantine and increased Garda checks near Dublin airport on cards

28 Behind Her Eyes: Eve Hewson could have found star-making role in Netflix thriller

33 Cold and working from home? How to stay warm without whacking up the heating

34 Coronavirus search: See how Covid-19 is spreading in your area

35 Meal Box review: From the first bite you will be bowled over

38 Parents of children with special needs: ‘We are emotional and exhausted’

39 Remote working ‘revolution’ bringing people back to towns and villages