If the negotiations were based just on logic, a deal would be done. But it’s not that simple 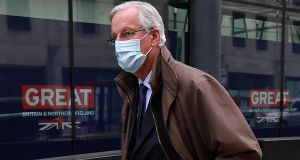 For my erstwhile colleagues in the UK administration, it’s time to recognise that the alternative outcome – no deal – would mean major disruption, internally and internationally. No deal would mean the inevitable imposition of tariffs and quotas on trade between Britain and the EU, and indeed between Britain and Northern Ireland. This would be on top of the other restrictions to trade, through customs, sanitary and other administrative checks and trade frictions that are baked in even if there’s a deal.

It would mean a break in security co-operation with the UK’s closest neighbours when we continue to face common threats from terrorism, serious and organised crime, and cyber bad actors. At precisely the time when some of those who wish us all harm might be tempted to exploit our divisions, the UK would find itself outside the networks, agencies and crucial law enforcement databases that underpin the work of the police, border guards and immigration officers. This could pose challenges for even well established relationships, such as that between the PSNI and the Garda Síochána.

More generally, no-deal would create real difficulties for Northern Ireland, and tensions elsewhere in the UK. In the absence of a deal the EU-UK joint committee established to oversee the withdrawal agreement would struggle to resolve the remaining tensions regarding the future governance of Northern Ireland.

The UK government’s attempt – via the Internal Market Bill – to take out “insurance” against what it sees as a potential risk of over-restrictive or one-sided interpretation of the withdrawal agreement by the joint committee is widely seen to have backfired. But without a deal there would inevitably be pressure to double down on the Internal Market Bill and similar clauses that override the withdrawal agreement in the planned finance Bill. This would further undermine the trust and co-operation needed to make the joint committee structure work.

Meanwhile, in Scotland the SNP can hardly disguise its anticipation of the fillip it would stand to get from no-deal in the run-up to next year’s key Holyrood election.

No deal would destroy the remaining trust – already sorely tested – between the EU and the UK government. This would inevitably undermine the prospect of reaching a positive outcome to the ongoing assessments on financial services equivalence and data adequacy. These are separate from the negotiations, but they are inherently forward-looking and can’t help but be affected by issues of predictability and trust. There’s been much commentary on the implications for the City of London and the UK’s tech sector, some of it upbeat, but it’s difficult not to see new barriers as a drag on growth at a time when the UK will be looking to recover after the pandemic.

And no-deal would mean the UK breaking with its European neighbours just as they seek to renew relations with the incoming Biden administration in the US. On a range of issues, the EU is looking to reach out to and strengthen the working links with the new administration, including on climate, health, tech regulation and privacy, foreign relations and notably the question of how to handle China.

The UK will want to tackle many of these same issues next year during its presidency of the G7, and in the run-up to the next COP meeting it will be chairing, with Italy, at the end of the year. From the US side, the new administration is looking to build and reinforce alliances, and is unlikely to look favourably on new tensions and splits among like-minded partners.

So no-deal would be, to put it mildly, challenging for the UK. But the challenges don’t all fall on one side in these negotiations.

For my former colleagues in the commission and across the EU, it’s time they also faced up to some of the realities of the fall-out from a no-deal. Extra barriers to trade would cut in both directions. No deal on fishing rights won’t help the fishermen in Ireland, Belgium or northern France, and it won’t lower the political temperature around the issue.

Difficulties for Northern Ireland would directly affect the Republic, and the Republic’s relations with its most intertwined neighbour, Britain; through the commission and their role on the joint committee, other member states would be drawn in, and the Biden administration would probably press all involved to find solutions.

Disrupting links with the City would not be cost-free for those across the EU seeking capital or access to international financial markets. Erecting new barriers to the transfer of data would have economic and potentially political implications, especially when the EU is reaching out to the US to find common approaches on data and tech. And no-deal would inevitably complicate EU efforts to promote a wider international, geopolitical agenda, whether through the G7, G20 or at the UN.

In short, everybody stands to lose out with no-deal.

If these negotiations were based solely on logic, then the case for reaching a deal now would be open and shut. But they are also based on emotions, issues of identity and different narratives – some might say myths. And trust, of course.

The EU worries that the UK might somehow cheat; the UK fears the EU wants to tie it down and dictate its rules. It’s asking a lot of any deal to salve these kinds of concerns. But leaders on both sides of these negotiations need to take a hard-headed look at the underlying issues and their respective interests, and recognise that a deal would at least allow us to start to address differences, some of which have built up over a long time. We build, or rebuild, trust by finding ways of working together, not by turning our backs.