Newton Emerson: The North’s approach to difficult statues is adding rather than removing 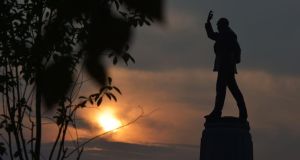 It is surprising that the new mood of iconoclasm has not alighted upon Belfast’s statue of Dr Henry Cooke.

A 19th century Presbyterian clergyman, Cooke had nothing to do with slavery – but that has not stopped Northern Ireland making the present moment about itself, as usual. The statue of Edward Carson outside Stormont has been much mentioned online, as have two statues of Queen Victoria, although due to her reign coinciding with famine, not empire.

1 Covid-19 in Ireland: Colour-coded response set to replace phases
2 Donald Trump immediately targets Kamala Harris in campaign video
3 Moving in and out of lockdown is a recipe for economic disaster
4 Ireland among countries urged to consider reinstating Covid-19 restrictions
5 Brianna Parkins: Staycationing just means paying through the nose to sleep in someone else’s uncomfortable bed
6 New Zealand considers freight as possible source of new Covid-19 cluster
7 Sunny spells forecast with high temperatures of 26 degrees
8 Michael McDowell: Free the Shelbourne Four from ‘woke’ activism
9 ‘I’m afraid an intimate photo may be used to blackmail me or be sold to a porn site’
10 Madigan’s primary goal is Ireland caps after switch to Ulster
11 Seán Moran: It won’t take much before cancelling All-Ireland looks like a solution
12 AIB concedes Covid mortgage policy was ‘regrettable’
13 Kamala Harris an assured performer but past record faces scrutiny
14 Standoff ensues over Minister’s unavailability at Covid committee
15 Covid-19: Restrictions an attempt to prevent State going back to ‘beginning’
16 A new species of dinosaur discovered on the Isle of Wight
17 An Garda Síochána criticised for Irish-language law non-compliance
18 Seat’s new Leon: It’s now better than the VW Golf it’s based on
19 ‘I’ve been sleeping with my girlfriend’s sister. I need help. What do I do?’
20 Lowest numbers in two weeks as one more Covid-19 related death and 35 new cases reported
21 My sporting disappointment: Battered, bloodied, broken by The Wall
22 Objectors stall production of enough timber for 1,000 houses
23 Revised help-to-buy scheme opens for applications
24 Let us pursue the coronavirus - not just watch its R number wax and wane
25 KBC Ireland chief feels heat from big tech in race for relevance
26 Harvey Norman targets Irish property developers
27 Russia set to begin Covid-19 vaccinations within weeks
28 Covid-19: The fallout for families has been immeasurable
29 The New Mutants: ‘I kept reading all these articles and none of it was true’
30 The Irish Times view on resurgence of Covid-19 in Europe: adapting to the new normal
31 British economy slumps into recession after record drop in quarterly output
32 Majority of parents believe children now face mix of classroom and home schooling
33 Covid-19 testing under scrutiny after meat factories and creche affected
34 Dwayne Johnson hangs on to title of highest-paid male actor
35 Maura Higgins: ‘I really hated it. Apart from that massage, the rest of it can kiss my ass’
36 Brutalist beauty in Brittas for €495k
37 KBC Ireland open to selling legacy problem mortgages
38 Government gives go ahead for €12m fund to help enterprise centres
39 Glanbia sees sharp decline in profits due to Covid-19 crisis
40 'They won’t find any spot of fire': Bolsonaro denies existence of Amazon blazes
Real news has value SUBSCRIBE