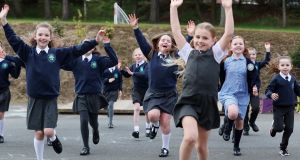 Only 65 of Northern Ireland’s 1,000 schools are integrated, teaching 7 per cent of all pupils. Photograph: Jonathan Porter/PressEye

The first Catholic school to be approved for integrated status in Northern Ireland, Seaview Primary in Glenarm, Co Antrim, has been congratulated by actor Liam Neeson, a long-time supporter of the Integrated Education Fund.

The approval is more than symbolic. A Catholic school that becomes integrated will retain much of its autonomy compared to schools directly controlled by the state’s Education Authority. As with the ancient joke about Catholic or Protestant atheists, there will be such a thing as a Catholic integrated school. This should be a positive development, addressing the concerns of some republicans that integration is a unionist plot or a “unionist-lite” ethos by default.

However, Seaview may be too late to blaze a trail. It applied for integrated status to survive falling enrolment in a village of fewer than 2,000 people. A simple understanding of its circumstances is that Glenarm cannot fill one Catholic and one state (de facto Protestant) school but it can have one thriving integrated school.

This is how integration should have spread after the Belfast Agreement, organically and rapidly. From 1997, total pupil numbers began falling and continued to do so until 2010, by which point there were 50,000 empty desks – around 15 per cent of all capacity – and rationalisation of the schools estate was a major political issue. Ministers have a statutory duty to “encourage and facilitate the development of integrated education”, reaffirmed in the Belfast Agreement, which adds this is “an essential aspect of the reconciliation process”.

But existing interests dug in and integration barely progressed. Since 2010, pupil numbers have risen again and the “empty desks” mechanism has gone into reverse. Where schools are full, parents who want integration in principle – by far the majority – will fear it in practice: if the local state school becomes integrated, for example, it will have to enrol a quota of Catholic children. But if the local Catholic school does not follow, that same quota of Protestant children would have nowhere to go.

Although the Glenarm scenario can still occur, through rural depopulation or the move to larger schools in general, integration still faces resistance. The Catholic church has always proposed closure over integration. The DUP and Sinn Féin agreed a deeply cynical “shared education” policy in 2014 that pretends joint day-trips and classroom exchanges are a meaningful substitute for learning together.

The first Catholic school to apply for integrated status, Clintyclay Primary in Co Tyrone, was blocked by a Sinn Féin education minister. In 2015, a court ruled the decision was “infected” with false information and breached the duty to encourage integration. Clintyclay would have had a “ground-breaking” and “galvanising” effect on the integrated sector, the judge concluded.

DUP ministers have also blocked integration, most recently last month. Official priority is given to not jeopardising enrolment at other schools, which integration tends to do because it is popular and in short supply. This is understandable from an administrative perspective but it is a perverse incentive against the reconciliation prioritised in the Belfast Agreement.

The result has been glacial progress. Only 65 of Northern Ireland’s 1,000 schools are integrated, teaching 7 per cent of all pupils. Just 25 of these schools took the “transformation” route to integration used by Seaview, with the first doing so in 1991 – a rate of fewer than one per year.

The remainder were set up from scratch, by parents coming together and applying for funding. This was the original model for integration and is better suited to a period of rising pupil numbers but it is more arduous than transformation and has progressed at the same average rate of one school per year since 1981.

It is clear a truly transformative policy is needed. The Catholic Church considers itself unfairly portrayed as the obstacle. Perhaps it should be left alone, with the focus on integrating state schools, most of which are under strong Protestant church influence via reserved seats on their boards of governors. A report last September by the University of Ulster found this system, a legacy of church school ownership generations ago, entrenches division and involves practices that would be “unconscionable in almost any other workplace”.

Removing church governors would open the way to a conception of integration by ethos rather than by quota.

An endearing feature of suburban Northern Ireland is how people will confidently describe their neighbourhood as mixed, although it might be entirely Catholic or Protestant, because mixing is aspirational and conveys ideals of tolerance and minding your own business.

The current model of integrated education requires inquiring into people’s backgrounds and constantly measuring numbers. Moving past that, if not into full secularism, could be the “big bang” approach required.

The starting point should be asking why this part of the Belfast Agreement remains so obscure, including by those most insistent on full implementation.

2 What is unionism without the union? The question has us spooked