Faith in system could simply melt away, with profound political consequences 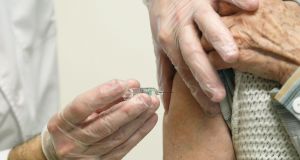 Northern Ireland’s vaccine rollout has been a triumph, but the end of the pandemic does not herald getting plans back on track; it just reveals a steadily worsening underlying problem. Photograph: Istvan Filep/EPA

Behind the triumph of its vaccine rollout, Northern Ireland’s health system is buckling. A fifth of the population is waiting for a first hospital appointment, half of them for more than the supposed maximum of one year.

While these figures are largely unchanged since the start of the epidemic, typical waiting times across a range of specialities have doubled to five or six years, including for urgent referrals – and that is only for an initial consultation, after which there are more years of waiting for treatment. The broad specialisations affected, such as orthopaedics, neurology and rheumatology, are now effectively closed to new patients.

Tackling waiting lists was a priority under last year’s New Decade, New Approach deal to restore devolution. The end of the epidemic does not herald getting plans back on track; it just reveals a steadily worsening underlying problem.

Five major reports have made the same recommendation over the past three decades, been solemnly endorsed by ministers, then left on the shelf

The health budget will grow by 5.7 per cent this year, not including extra funding for Covid, yet this does not meet the 6 per cent cost of maintaining services at their existing level. Staffing bottlenecks are emerging that would take years to address, even if money were available.

One-off initiatives to reduce waiting lists have become a crucial desperate measure but capacity for this will be hard to find into the medium term. Northern Ireland’s small private health sector has been maxed out by the epidemic, with public and private capacity across Britain likewise constrained.

Behind all these issues lies a context of long-overdue structural reform. Services need to be rationalised into fewer, larger hospitals and regional specialist centres. Every party at Stormont agrees this must be done but nobody wants to do it, as it means closing or downgrading small general hospitals.

Five major reports have made the same recommendation over the past three decades, been solemnly endorsed by ministers, then left on the shelf. The latest, the 2016 Bengoa report, is officially executive policy.

This week the chairs of all Northern Ireland’s hospital trusts, normally media shy, united to issue a warning on waiting lists. Their key request was revealingly pathetic. Repeated political crises mean Stormont has had only annual, non-recurring budgets since 2014, rather than the five-year financial programmes it is meant to set for each mandate. The chairs pleaded for multi-year budgets so that basic plans can be made, let alone radical reforms enacted.

“Collapse” is a strong word to use about a health service still providing excellent care to hundreds of thousands of people and receiving £6.5 billion (€7.5 billion) a year, more than half of Stormont’s spending. However, a sense of the system failing is seeping into public consciousness and may reach a tipping point as Covid subsides.

The public’s first instinct is for a functioning Stormont to fix the NHS. That almost certainly remains the case

Resorting to private care, once unusual, is becoming a common first- or second-hand experience. Interest in private insurance must be rising. The Human Rights Commission is backing a legal case for one patient forced to go private and another in their fourth year on a waiting list, promising landmark judgments on public funding for private treatment.

Faith in the system could simply melt away, with profound political consequences, the most wearily predictable of which is NHS failure becoming a constitutional battleground.

Free healthcare is known to be a selling point of the union to nationalists and the non-aligned. Unionists have boasted, perhaps unwisely, of the Covid response emphasising this benefit of UK membership.

Republicans have been testing the potential of the opposite message. Activists and commentators are increasingly highlighting the length of Northern waiting lists and making unfavourable comparisons with the Republic. Sinn Féin keeps a careful distance, while issuing blandishments about a new all-Ireland health service.

Promoting Irish unity by criticising the NHS could also be unwise.

Devolution was restored last year only because the electorate lost patience with constitutional posturing over Brexit and a Border poll amid a waiting list crisis.

Sinn Féin and the DUP were shocked when large fractions of their vote switched to Alliance. They took the hint and went back into office, vowing to solve the problem. Both parties seem in danger of forgetting that lesson. The public’s first instinct is for a functioning Stormont to fix the NHS. That almost certainly remains the case, with polls showing the shift to Alliance continuing. Sinn Féin could never risk the suspicion of obstructing the health system, actively or passively, for a republican agenda.

However, politicians from all parties might point out the public will not like the fixes in the Bengoa report, so they are in a democratic deadlock.

The past year’s doubling of many waiting lists might snap the electorate out of this and make unpopular reforms an imperative. Or it could cause enough people to give up on the NHS to let Sinn Féin introduce a combative new health politics to its unification platform. The cause that forced Stormont back together would then begin driving it apart.