Newton Emerson: Gerry Adams is out of North’s sight and mind

In light of latest tweet gaffe, what sort of deputy first minister would Adams be? 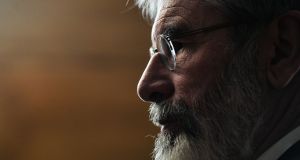 Sinn Féin president Gerry Adams: he comes to the fore only during major political crises, which he is always largely responsible for causing. This increasingly makes him look like a one-trick troublemaker. Photograph: Charles McQuillan/Getty Images

When events require media criticism of Gerry Adams, the response from the Sinn Féin faithful follows a pattern: you’re obsessed with Adams, you don’t really care who’s been hurt by Adams, you’re just using his latest gaffe to attack Adams, you’re frightened of the success of Adams and your criticism will only increase support for him.

Perhaps this is a valid riposte in the Republic but, in Northern Ireland, an Adams gaffe is mainly just a reminder the Sinn Féin president still exists. From a unionist perspective, he emigrated five years ago. I realise that term sounds overblown – Dundalk is hardly as foreign as France. However, readers in the South should consider how indifferent they are to the North, then realise this effect works both ways. Most of the time, Adams is out of Northern sight and mind.

He was losing prominence even while he was here, eclipsed by Martin McGuinness as Deputy First Minister. Why Adams chose not to take a Stormont Executive position has never been explained – he may have considered himself above the partitionist transitional Assembly. Whatever his intention, the result was that he came to the fore only during major political crises, which he was always largely responsible for causing. This increasingly made him look like a one-trick troublemaker, giving us even more reason to be glad to see the back of him.

Adams’s latest comments, implying Northern nationalists were treated like African-American slaves, were objectively less offensive than the 2005 speech by Mary McAleese, Ireland’s first UK president, who said Protestants taught their children to hate Catholics like Nazis hated the Jews. The crucial difference was revealed in how each handled the fallout. McAleese apologised profusely and tried to reach out to the unionist community by getting her husband to play golf with the UDA. Of course this only made it worse but the McAleeses seemed genuinely unaware of that, bless them.

Adams then claimed to have founded the Civil Rights Association at the age of 19 to throw off his chains, although none of the official founders recalls his involvement and the association had achieved all its goals on housing, jobs and the vote by 1972, rendering the Provisional IRA campaign completely illegitimate.

Listening to Adams’s histrionics from safely behind the Border, the main question that arises is: what sort of deputy first minister would he have been? He seethes with such self-serving resentment that he could not possibly have replicated McGuinness’s calm professionalism.

There are whispers McGuinness’s avuncular Stormont persona is just an act and he retains the character and temperament of a man with an extremely dark past. However, most politicians are acting to some extent so it still counts that McGuinness chooses to put this act on and to make it durable and credible.

The suspicion that McGuinness and Adams are playing nice cop/nasty cop with the unionist community, in part to satisfy the worst instincts of the nationalist community, was belayed by Stormont’s recent welfare reform crisis, which Adams clearly seems to have caused against McGuinness’s wishes. In any case, what does it mean when when nasty cop has moved abroad?

The Sinn Féin faithful would say Adams remains essential to the all-Ireland project. But which seems more likely to deliver unity – McGuinness working with unionists in the North or Adams insulting them from the South? The answer to that looks black and white.