New European identity may be found in Notre Dame’s ashes 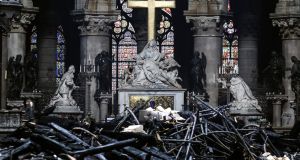 Notre Dame altar surrounded by charred debris: the outpouring of emotion points to Notre Dame having an importance which is cultural and not just religious. Photograph: Ludovic Marin

Like half the world, it seems, I’ve always felt a slight but real connection to “Our Lady of Paris”, as Victor Hugo called the cathedral of Notre Dame of Paris. For some happy months I spent at the Centre Culturel Irlandais in Paris a few years ago, my daily walk led me across the Seine on the Pont Sully, with a fine view of the flying buttresses at the rear of the cathedral, which I much preferred to the front, with its throngs of tourists. I would always pause briefly and look up towards her, remembering that it was in this building that my wife, as a 16-year-old Dutch girl, had sung for the first time in public in France.

Despite this, and despite the normal distress at seeing historic buildings damaged, I still find something slightly odd and disturbing about the outpourings of emotion and rhetoric which have accompanied the fire last night. You can’t help suspecting that a nerve has been touched. But what is it? After all, no lives, thankfully, have been lost and many artefacts have been rescued. The building itself is recoverable.

The fact is, Notre Dame is a totem of French culture, but above all, of la France eternelle

In terms of destruction of monuments, it’s important to have some context. Much of the important medieval Catholic art and architecture in Europe has been lost or defaced down through the centuries. Large quantities of masterpieces were destroyed by the outburst of Protestant iconoclasm in the 16th century, melted down, stolen or otherwise obliterated by wars and political upheavals. It’s right to treasure what we have, but there are other cathedrals, some of them magnificent. And Notre Dame can apparently be rebuilt. Perhaps the French can ask the Germans for some expert advice on restoring fire-damaged cathedrals?

Commentators have been at pains to say that the outpouring of emotion points to Notre Dame having an importance which is cultural and not just religious. There can be no doubt that Notre Dame has played an important part in the history of France. It was here in 1572 that Henry IV was married, the man who later declared that “Paris is worth a Mass”. Here, Napoleon was crowned emperor in 1806, underlining that the relationship between the so-called French laicité and Catholicism has often been, to say the least, pragmatic.

Reading and listening to accounts of Parisian eyewitnesses today, it is remarkable how many refer to cultural and historical events, from Victor Hugo to De Gaulle and the liberation of Paris. The fact is, Notre Dame is a totem of French culture, but above all, of la France eternelle. As Macron put it, Notre Dame is the “epicentre of our lives”. Listening to Macron, it was striking to hear how often he, the prophet of the new Europe, used words like “nation” and “destiny”. In the new Europe, will nation states still have “destinies”?

Does Macron, for all his federalism, see the new Europe as a kind of France writ large, with its shared heritage and shared destiny?

More importantly, what exactly is this destiny? No one is under any illusions that Europe is undergoing an identity crisis, of which Brexit is just one symptom. It turns out that vast amounts of Europeans are clinging on to, or falling back on, identification with national and ethnic identities in a way many of us thought was obsolescent. Looking around for unifying imaginative structures to shore it up, to persuade its citizens to identify with it in the way they identify with the older models, the European Union increasingly finds itself looking to the past for shared iconography, which can encourage loyalty from its citizens, particularly to concepts like Charlemagne and the Holy Roman Empire.

For example, the Austrian president Alexander van Beelen tweeted, tellingly, that the sympathy shown by Europe at this disaster “demonstrates the great importance of our shared cultural and spiritual heritage”. So much for the new Europe.

Here is the problem: how to imagine a new Europe which does not base itself on the “shared heritage” of the past, a heritage which in fact is not shared by many of its citizens. Does Macron, for all his federalism, see the new Europe as a kind of France writ large, with its shared heritage and shared destiny?

Despite all these reservations, the sadness felt by myself and others is also real. Last night I phoned a friend in France, and he told me the following story. As a teenager in the 1970s he had bought some marijuana for the first time, in a side street near Notre Dame. As he wandered around, late at night, in front of the cathedral facade, he was, improbably, stopped by two detectives. They searched him and found his illegal drugs, a very serious offence in France at the time. But they simply called him an idiot, and sent him on his way. Ever since then, he said, he has never passed Our Lady of Paris without saluting her, convinced it was her intervention that got him off. Last night he shed a tear, and I sympathised. But at the same time, this terrible fire may also have revealed some serious faultlines in thinking about the new Europe.

Michael O’Loughlin is a poet and commentator