Rite&Reason: There is no prohibition in the scriptures about women ministering 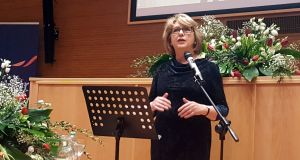 Former president Mary McAleese addressing the “Voices of Faith” conference in Rome: to be heard, she had to speak outside the walls of the Vatican. Photograph: Patsy McGarry

While there have been important cultural advances for women in terms of their role in society, the one institution that does not appear to have altered its attitude towards women to any great degree is the Roman Catholic Church.

This is despite Pope Francis’s 2013 remarks that women are “essential for the church”.

It seems that it is also “essential” that women remain silent, and the long-held tradition that women should remain silent in church, attributed to St Paul (1 Corinthians 14.34), and now believed by scholars to be a later addition to his letter, continues to dominate the Vatican mindset.

To dismiss this edict as no longer applicable is to underestimate the deep-seated antipathy to hearing the voices of women in the institutional church.

This was epitomised recently when the former president of Ireland, Mary McAleese, was vetoed from speaking at a conference to be held within the Vatican on International Women’s Day.

The objective was to silence her. To be heard, therefore, McAleese had to speak outside the walls of the Vatican.

The Catholic experience continues to be male-centred, male focused and disseminated from the male perspective

And, within those walls, there are restrictions. For instance, while women could speak at the Extraordinary Synods on the Family in October 2014 and October 2015, they did not have voting rights. It seems clear, therefore, that access to decision-making in the Catholic Church remains inaccessible to women.

Whatever rhetoric is used by the church in its attempts to suggest that they hear women, and that they have regard for women’s “genius” and “dignity”, clearly it stops short of action.

The Catholic Church’s issues with women have deep roots that go back as early as 50 years after the time of Christ when women’s participation in the newly established Christian communities began to rankle.

Scripture itself has been used in the past to position women as secondary, inferior, as mere appendages to men and of little import.

In practice, therefore, the Catholic experience continues to be male-centred, male focused and disseminated from the male perspective. As a woman, once you see this, it is hard to ignore; how can women “unsee” that their thoughts, stories, experiences and teachings are neither considered, discussed nor communicated?

One place in particular where the neglect of women remains stubbornly resolute is the matter of ordination. In 2010, the Vatican upgraded the “crime” of ordaining women to Catholic ministry. This action was part of an attempt to close down any further “doubt” with regard to this issue.

And, if the church is absolutely sure about its stance, why is discussion seen as such a threat to church teaching? The censuring of theologians and religious personnel, such as Fr Tony Flannery and Fr Brian D’Arcy, who have tried to discuss this issue, among others, attests to the Vatican’s perception of threat.

With an educated, questioning laity, and movements around the world to end the commonplace abuse of women and girls, it is timely to examine the role of women in the Catholic Church.

Given that there is no definitive prohibition in the scriptures about women ministering in the church, the question arises as to why the Catholic Church is so deeply opposed to the idea of women in ministry, and whether that “certainty” is based on theological or sexist grounds.

Women who see clearly the reality of how they are judged by the church are no longer willing to remain silent.

It joins with movements such as #MeToo, #EverydaySexism and #TimesUp, in the international initiative by women to announce that being silenced and being subject to unfair and often abusive treatment because of their gender is no longer tolerable in any setting. Dr Sharon Tighe-Mooney is an independent researcher and author of What About Me? Women and the Catholic Church, recently published by Mercier Press