Moore Street: Terms have already been agreed in battle for ‘Ireland’s Alamo’

Easter Rising monument has long been delineated by planning authorities

Protestors calling themselves 'Save Moore Street' have occupied buildings linked to 1916 on the famous market street in Dublin. Video Éanna Ó Caollaí 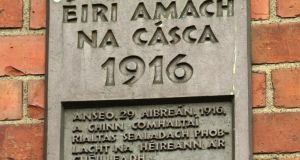 Commemorative plaque at 16 Moore Street where republicans decided to surrender towards the end of the 1916 Rising. Photograph: Frank Miller

Had it been left entirely to property developer Joe O’Reilly, the decrepit buildings at 14-17 Moore Street, where leaders of the Rising took refuge after withdrawing from the GPO, would have been cleared away for a long-planned shopping centre.

However, it hasn’t worked out like that. A determined campaign by the 1916 Relatives Association and others, based on a claim that the property constituted “Ireland’s Alamo”, resulted in the threatened buildings being designated a national monument in 2007.

Earlier this month, as work finally got under way to reinstate 16 Moore Street – where the last meeting of the Provisional Government took place – protesters led by Éirigí, a socialist republican political party, occupied the site because of fears that adjoining buildings were about to be demolished.

The relatives association then took a High Court action against Minister for Arts and Heritage Heather Humphreys to prevent any demolition.

It was claimed that the designation of 14-17 Moore Street as a national monument should be extended to include numbers 13, 18 and 19 as well as several buildings on Moore Lane to the rear, on the basis that these were all part of a “battlefield” site.

But the relatives are on a sticky wicket in taking legal action at this stage, because the relevant planning files show that there was never any intention of retaining these buildings and that what is now being done is in accordance with the planning permission granted in 2010.

A spokeswoman for the Department of Arts and Heritage said that while 14-17 Moore Street contains “significant physical evidence of the presence of the insurrectionists”, number 13 is a much more recent building and 18 and 19 “were in ruins at the time of the Rising”.

Announcing the start of work on the project last November, Ms Humphreys noted that the Government had bought the four buildings last year, so that conservation and restoration work could be carried out to develop it as a 1916 commemorative centre.

The focus, she said, was to “reveal the buildings as they were during the Rising” so that visitors could see “the period architectural detail, the living conditions and, above all, the imprint of the insurgency”, including large holes hacked through walls.

Chartered Land’s planning application for a mammoth retail precinct on the site specified that the works at 14-17 Moore Street would include demolition of “non-original additions and partitions”.

All other buildings on the east side, including a fine terrace of shops dating from the 1920s at its Henry Street end, were to be knocked down – a fate that An Bord Pleanála senior planning inspector Jane Dennehy was “not satisfied” could be justified.

However, in her 122-page report on the Chartered Land scheme, Ms Dennehy said she was “fully satisfied as to the conservation approach, project concept and methodology that has been drawn up by [conservation architects] Shaffrey Associates to . . . render the principal buildings suitable for use”.

“They provide for adaptation with minimal intervention for the future active use of the buildings, retaining their character and most of the original features that survive.”

Ms Dennehy noted that “more precise detail of the proposed maintenance, repair and supplementary works to facilitate optimum retention and survival” would become clearer as the fabric of the buildings was opened up, but she was satisfied that the “finer details” could be addressed by “appropriately qualified experts”.

The die is cast, in other words. Those seeking to “save” Moore Street now were not active in the early 1980s when the west side was laid waste to make way for the dreadful, suburban-scale Ilac centre. They have also misplaced “Ireland’s Alamo”. For most of us, that was surely the GPO.