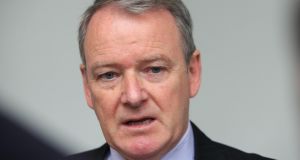 Unlike MLA Barry McElduff who quit his seat after posing with a Kingsmill loaf on the anniversary of the Provo’s infamous sectarian massacre, Brian Stanley is to face no sanction. Photograph: Gareth Chaney Collins

‘13 gone but not forgotten: we got 18 and Mountbatten”. This was painted up across Northern Ireland by IRA/Sinn Féin members in the aftermath of the Mullaghmore and Warrenpoint killings on August 27th, 1979.

Their tit-for-tat arithmetic omitted Doreen Brabourne, her son Nicholas aged 14 and Paul Maxwell aged 15, who were blown to pieces along with Mountbatten by their remote-controlled bomb.

So what is the significance of Deputy Brian Stanley, chairman of the Dáil Public Accounts Committee, tweeting supportively about the Warrenpoint killings?

The Taoiseach said he was shocked at Stanley’s tweet. Mary Lou McDonald has reassured us that the tweet will not be repeated.

Unlike MLA Barry McElduff who quit his seat after posing with a Kingsmill loaf on the anniversary of the Provos' infamous sectarian massacre, Stanley is to face no sanction.

Should we be surprised? I feel not. Every single Sinn Féin TD and senator, every Sinn Féin MLA and MP and the great, great majority of party members hold the same view of Mullaghmore and Warrenpoint.

Should we even be surprised that Stanley articulated such a view online? Even allowing for the real possibility that he deputes his online profile to party activists, his utterance is entirely consistent with the Provos’ general strategy to speak to their political base in a manner distressingly similar to Donald Trump talking up Charlottesville and the Michigan militias.

No other view is open, given the party’s overt participation in the grotesque mass-membership funeral procession for Bobby Storey to the republican plot at Milltown cemetery ending with a secret visit to a cordoned-off Rosemount crematorium.

What this proves is that Sinn Féin is no more a republican party in the tradition of Tone and Davis than are the Tories at Westminster.

The Tricolour of green, white and orange adopted by Davis and others symbolised the ambition to create on this island a society in which the green nationalist and orange Protestant traditions were reconciled in mutual respect and joined in the pursuit of a republic which truly embraced all its citizens, all their values and their identities. That remains the true republican vocation.

Ever since the 1998 Belfast Agreement, the provisional movement has set its course towards polarisation and against reconciliation – the ultimate republican ambition of Tone and Davis – glorifying its sectarian armed struggle against the wishes of the unionist and loyalist elements of what may be termed the Orange tradition.

The Storey funeral is a case in point. Storey was a ruthless enforcer and mastermind of the Provos’ campaign to amass a war chest to finance its post-ceasefire activities.

In July 2001, the British and Irish governments and North’s parties met at Weston Park in Shropshire to advance the implementation of the Belfast Agreement, decommissioning of weapons and establishment of power-sharing in Northern Ireland. The online archive of the Shropshire Star still features a smiling photo of Gerry Adams and a tag-along Mary Lou McDonald attending that event.

Alan Ruddock wrote a vivid account of Weston Park in the Observer newspaper that October. He recounted that Richard Haass, the American envoy, notified those present, including myself, that the United States was aware that the Provos were then engaged in transactions with communist Farc guerrillas in Colombia for the supply of IRA bombing technology and semtex, all to yield the post-ceasefire Provo machine between $20 and $30 million to finance their political ambitions, from Farc’s control of cocaine supply to the US market.

Haass used soldiers’ language to threaten Adams and McGuinness with the consequences of any US casualties resulting from the Provos’ dealings. That warning, alas, did not spare the innocent in Colombia.

Sinn Féin is now the richest, most heavily resourced party on this island

At Bojayá on May 2nd, 2002, a gas cylinder mortar of the same design as those used by the Provos hit a church, killing outright 119 innocents among 300 who took refuge there during a Farc operation, and maiming many more. Provo arithmetic still excludes all those innocent casualties of implementing their masterplan to dominate Irish politics.

Bobby Storey remained criminally active, organising crime right up to the period which culminated in the St Andrew’s Agreement of 2006, and since as a leading member of the Provo politburo. His crimes included the Northern Bank robbery, and other robberies committed north and south of the Border at his direction and under his supervision.

Sinn Féin is now the richest, most heavily resourced party on this island.

It is time to wake up and smell the coffee. Middle classes may tut-tut or clutch their pearls at the prospect of a political machine operated by a small northern politburo entering government in Dublin after the next election; many of their children are beguiled by Sinn Féin’s promises on housing.

Stanley’s gaffe – if it was one – is a grim warning to us all.