Michael Kingston: The UK must stay in EU to protect rights 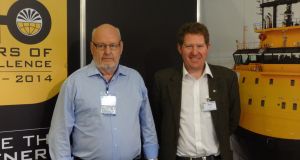 Michael Kingston (r) is working with the International Chamber of Shipping on a Humanitarian Assistance Zone in the Mediterranean.

I write as a lawyer that works on international regulatory issues and human rights to give some clarity about two of the key issues central to the debate about the UK’s membership of the EU, namely, migration and the European Convention on Human Rights.

The British public is not being told the position in simple terms. Voters may therefore make their decision on a misunderstanding.

It is popularly believed that the UK leaving Europe will halt migration, including refugees arriving in Britain via North Africa.

In reality, the apparently problematic element of migration may actually increase.

Last year saw a net increase in migrants to the UK of 330,000, half of whom came from EU member states.

The Leave campaign says these European economic migrants are a burden on the system.

Remain says they are usually all hard workers, skilled, and contribute to the the UK economy, enabling it to increase GDP.

We are told by the likes of Northern Ireland Secretary Theresa Villiers that Irish migrants will continue to have the freedom to come to Britain under the Free Travel Agreement agreed between Britain and Ireland.

But the fact that the Republic’s Border with Northern Ireland will be an EU border means there is a question mark over this issue, which has not yet been answered.

The issue of migration of people from outside the EU will not be resolved by the UK leaving the EU: thousands of non-EU students will remain in the UK at the end of their courses, a “problem” that will continue unless it is fixed.

There is undoubtedly pressure on Britain’s Border Agency to deal with illegal migration from non-EU countries.

However, leaving Europe will arguably make the situation worse, as Britain relies on France for huge assistance in its Border Agency work.

Many economic migrants from outside the EU are coming to Europe through Turkey and across the Mediterranean, intermingled with genuine refugees.

Up to 4,000 of these are currently interned in the “jungle” in Calais in France.

Leaving the EU will not change the UK’s obligations in any way under international law to process these people - many of whom will claim asylum as refugees under the UN’s 1951 Refugee Convention.

Under the convention it is the legal obligation of signatory states to assist refugees “where there is a serious threat to their life or freedom”.

Of course, not all migrants are genuine refugees, but they do still have to be processed and this may take years, mainly due to a lack of resources in the processing of these claims.

When one sees the pressure the Mediterranean migrant crisis has put on other European countries it is clear we have not fully appreciated what a comfortable position the UK has been in, to date.

The reality is the UK’s fellow EU members have shielded it from the brunt of the humanitarian emergency that is the migrant crisis.

The UK is not part of the Schengen Agreement, which has caused so many problems and tensions on mainland Europe.

The 2003 Touquet Treaty with France puts Britain’s border control in France itself.

Should Britain leave Europe, the French have every right to tear up the Touquet Treaty. This has already been threatened.

In leaving the EU, Britain will be at the mercy of anti-British sentiment in France. France’s appetite for dealing with Britain’s problems on its own doorstep may be greatly lessened.

Britain will have to go it alone, dealing with migrants in Hastings, Dover, and elsewhere.

Britain’s Coast Guard Agency currently relies greatly on the French, as was highlighted recently by the rescue of migrants in the English Channel.

Britain has only four patrol vessels for its 12,400km of coastline.

The Royal United Services Institute and the Defence Science and Technology Laboratory say France has “20 times the number of resources per kilometre of coast”.

There will be nothing stopping European countries from waving the north African migrants through to Dover and unscrupulous British traffickers can be expected to take advantage of this weakness.

The president of the French coast guard, Bernard Barron, said: “It’s starting to become a very similar situation to that seen in the Mediterranean and my biggest fear is that the same kind of tragedies we see in Greece or Italy will start to repeat in the Channel.”

There is no doubt that Britain is ill-prepared for such a situation.

The British public has been told that many of its ills are due to it being a signatory to the European Convention on Human Rights (ECHR), mainly arising from the difficulties faced by the Home Office in its fight to deport the radical Muslim cleric Abu Qatada.

The ECHR is actually a standalone convention, ratified by 47 countries, including Russia, although its principles are enshrined in fundamental articles of the Treaty of Europe.

One of the fundamental rights of the ECHR is the right not to be returned to a country where there is a possibility of subjection “to torture or to inhuman or degrading treatment or punishment”.

The vast majority of deportations, despite appeals under this provision, are successful.

In the case of Abu Qatada, the solution ultimately was to get an undertaking from Jordan that Abu Qatada would receive a fair trial and would not be tortured or executed, a solution which, perhaps, Britain should have obtained from Jordan much earlier on.

The Charter of Human Rights, the basis of the 1950 ECHR, was championed by Winston Churchill after the horrors of Nazi Germany in the second World War and it was drafted with substantial input by British lawyers; one being David Maxwell Fyfe, who went on to become British Home Secretary.

The provisions incorporated in the Treaty of Europe have improved the lives of millions of Europeans, as countries have had to reach benchmarked standards on human rights before being allowed membership of the EU, something that Turkey, Serbia, and other prospective members have not yet satisfied, and which Turkey is a long way from achieving.

These principles provide a protection for the weak within their own countries, and for small nations oppressed by others, and include civil protections such as freedom of the press.

We do not even have to look beyond British borders to understand the benefits.

Without the ECHR, the Hillsborough bereaved would not have obtained justice, and the institutionalised collusion of the South Yorkshire Police Force would have remained unchecked.

Leaving the EU and reversing the Human Rights Act will mean recourse to justice will rest once more in the hands of the legislators of the day and the government minister responsible as ultimate adjudicator.

The ECHR also underpins the Good Friday Agreement, the Stormont Assembly, the Scottish Parliament and the Welsh Assembly.

In undermining the principles of the ECHR enshrined in the Treaty of Europe, and reversing the 1998 Human Rights Act, what sort of message will it send out to other nations about respect for the ECHR, and what will replace it in the UK?

These are questions that cannot be answered in concrete terms at the moment by the Leave campaign.

As Gareth Peirce, who represented many high-profile defendants on human rights issues and miscarriages of justice, has said: “Can we seriously countenance the hard-won commitment to enforceable rights slipping back unchecked into the insular indifference that caused injustice after injustice in our history?”

As stated above, the UK’s obligations under international law to assist refugees fleeing war-torn north Africa and elsewhere will continue regardless of whether the country is in or out of Europe on June 24th.

It is a matter of shame, that a proper process has not been implemented on the north African coast, despite the calls for a defined solution.

Just two weeks ago 900 people drowned in a few days, something which barely made media headlines.

A mechanism exists to put in place a Humanitarian Assistance Zone on the north African coast, through the Inter-Agency Standing Committee of the UN.

Under UN resolution 46/182 it would be possible to process refugees and migrants there in a humane and fair way.

It would involve using the many ferries and hospital ships that are currently laid up around the globe.

Processing refugees and migrants in a Humanitarian Assistance Zone on the north African coast is far preferable to them arriving on Europe’s shores in a dysfunctional mess by land and sea, and would help resolve some of the issues discussed herein for Britain.

Creating the zone would also destroy the deadly business of people trafficking and impose a control mechanism on the north African coast to differentiate between economic migrants and refugees under international law.

The International Chamber of Shipping, whose member vessels are under enormous pressure to rescue migrants in accordance with their duty under international conventions, have argued that the UN needs to create the Humanitarian Assistance Zone.

It would establish the jurisdiction to allow the European “state” to control the north African coast, in areas such as Libya and Egypt - but perhaps as far as Tunisia, Algeria and Morocco - and bring the Arab countries to the table.

The zone needs to be activated immediately by the UN’s Inter-Agency Standing Committee and it is our duty under humanitarian law to do so.

Irish people, given what they suffered on decrepit ships in the past, should appreciate more than any and they and Ireland should do all they can to support this, along with the UK.

We have an enormous decision to make on June 23rd, but let us make it with the correct information and an understanding of the reality of the consequences for migration and human rights.

And we must also remember too our continuing obligations under international law to help those in need.

We will be defined by the path that we choose.

Michael Kingston is working with the International Chamber of Shipping on a Humanitarian Assistance Zone in the Mediterranean. He is a past winner of Lloyd’s List Global Maritime Lawyer of the Year for his work on safety at sea.