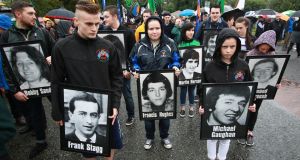 Relatives of prisoners who died during the hunger strikes march with their pictures at the ‘National Hunger strike Commemoration March’ in August this year. Picture Nick Bradshaw

You’d be hard pressed to find someone on these islands who doesn’t have an opinion on the hunger strikes. The 1980 and 1981 republican hunger strikes in Long Kesh/Maze prison represent a contested past, a lived history. Their impact and legacy cannot be easily or neatly defined. The strikes filled column inches at home and abroad and were the ultimate propaganda tool as the prisoners’ final attempt to raise awareness of their struggle.

There is little consensus among historians when analysing the crisis of 1980-81. Today The Irish Times is publishing two articles on a new microsite The Hunger Strikes that will examine the strikes over coming months of a major symposium in London next summer. The articles by leading academics Dr F Stuart Ross and Dr Niall Ó Dochartaigh account for the 1980 strike in very different ways. As these two articles demonstrate, there is no agreed upon history. The waters remain murky.

Much of the debate among scholars on the hunger strikes stems from a variety of sources – often conflicting– available. While this is a problem faced by all researchers, it is particularly relevant to recent conflicts such as the Troubles, where scholars are divided over the value of “human” sources, such as oral history, as opposed to archival documents. As Boston College and other recent projects have shown, there are ethical and legal repercussions involved in publishing such material. Further, who we choose to interview, and the information that person chooses to disclose, can lead scholars to very different conclusions.

We still lack a history of the hunger strikes that incorporates all of the sources available. Our project Rethinking the 1981 Long Kesh/Maze Prison Hunger Strike: 35 Years On seeks to readdress this deficiency, by bringing scholars together from disparate fields to assess the cultural, political and religious impact of the 1980 and 1981 hunger strikes both at the time and also over the last 35 years.

One of the best works

There was quite a lull in academic literature until F Stuart Ross’s Smashing the H-Block (2011); the most comprehensive academic work on the subject so far.

As well as analysing the struggle inside the prison, Ross examines the work of grassroots campaigners outside. Without the Anti-H Block campaign, Ross argues, the political success of the hunger strikes would have been less. The most recent work comes from Thomas Hennessey. His book Hunger Strike: Margaret Thatcher’s Battle with the IRA 1980-1981 (2013) looks at British government opinion on the protests from recently released material available at The UK National Archives in London. Hennessey is interested in communications between MI6 and the Provisional IRA during this period and provides a new perspective from the British government. However, again, this book must be read in conjunction with other works.

Of course general histories of the Troubles have also added to our understanding of the hunger strikes. Richard English’s Armed Struggle (2003), Ed Moloney’s Voices from the Grave (2010), and David McKittrick’s Making Sense of the Troubles (2000) all discuss their political impact on the republican movement. Testimony from former republican prisoners can be found in Brian Campbell, Laurence McKeown and Felim O’Hagan’s edited collection Nor Meekly Serve My Time: The H-Block Struggle of 1976-1981 (1994). Equally, hunger strikers’ thoughts can be found in Hunger Strike: Reflections on the 1981 Hunger Strike (2006), a collection edited by Danny Morrison.

Of course there are biographies of the key players involved in these strikes, including Denis O’Hearn’s Nothing but an Unfinished Song: The Life and Times of Bobby Sands (2006).

It is ironic the controversy ignited by O’Rawe dominates non-academic discussion of the events of the prison protests. The divisions currently defining writings on the hunger strikes are not between British and Irish or unionist and nationalist perspectives. They reflect fierce antagonisms within republicanism, and are also related, albeit in complex ways, to the political divide between those who support the current Sinn Féin leadership and a variety of dissenting viewpoints.

To date, there has been no truly comprehensive volume on this crisis and its legacies on regional, national and international levels. Dr Alison Garden and I hope to explore these legacies both through this Irish Times series, and our symposium at Notre Dame’s London Campus next June. Maggie Scull, King’s College London