Why are disasters at sea treated differently to air crashes? 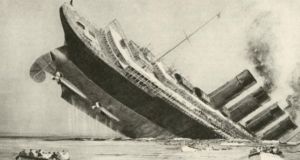 ‘Since the Lusitania was sunk in a mere 300 feet of water on May 7th, 1915, with the loss of 1,198 lives, no public money has been spent to research the cause of the second explosion which was the coup de grâce following the single torpedo strike.’ Above, Punch cartoon on the sinking of the Lusitania, 1915. Photograph: Getty Images

When TWA flight 800 was shot out of the air on July 17th, 1996 off Long Island, New York , the US government spent upwards of at least $100 million on research and recovery. There were 230 lives lost in that disaster.

When Pan Am flight 103 was blown up over Lockerbie by terrorist action, 270 lives were lost and no effort or dollars were spared for years to research the accident and pin the blame on Libyan malfeasance.

Currently the expenditure of funds searching for the March 2014 missing Malaysian airlines flight #370 must have already topped at least $50 million. There were 239 people on board.

Yet since the Lusitania was sunk in a mere 300 feet of water on May 7th, 1915, with the loss of 1,198 lives, no public money has been spent to research the cause of the second explosion which was the coup de grâce following the single torpedo strike. Nor in the case of the ferryboat Estonia which was sunk in 265 feet of Baltic sea water in1994 with the death of 852 citizens of multiple countries, has there been any significant public money spent on in situ research to determine the cause. Since both of these wrecks lie in relatively shallow waters, there is no insurmountable technological problem to visiting and working on them.

Why is there this double standard concerning these disasters, plane versus ship, especially considering the magnitude of victims in the nautical tragedies? Airplanes evoke huge expenditures from State treasuries with the most advanced technologies brought to bear. For calamities at sea, governments prefer to ignore, or even in the above-mentioned two cases of sinkings, to actually impede bona fide efforts of private resources to unravel the mysteries surrounding the devastating wrecks.

As the owner of the Lusitania, this writer has been trying for over 40 years to resolve issues surrounding its demise. Now that the technologies available for underwater work are so much further advanced, the only major impediment against success is the Underwater Archaeology Unit (UAU) of the Monuments Department of the Ministry of Arts Culture and Gaeltacht. The department ignores the established definition of archaeology which is considered to be “the scientific study of ancient peoples and cultures”. The Lusitania and its victims fail completely to meet that definition. A mere 100 years ago simply is not “ancient”. The UAU appears to be operating from a false premise.

Even if it were, for the past 20 years, the UAU, rather than fulfilling its raison d’être to perform “scientific study”, has instead thwarted the owner’s desire to answer the single most important question about the Lusitania: the cause of the second explosion. Instead the UAU has spent over $1,000,000 of Irish taxpayer funds in legal fees trying to block legitimate historic research and recovery. What a waste of resources. That money could have been used to carefully and respectfully open up several sections of the port side of the wreck to gain access to the inside for analysis of where and what happened when the torpedo hit and the subsequent second explosion.

The same problem exists for the Estonia. Having led a private research expedition in the year 2000 to this wreck in the Baltic, totally forbidden by surrounding states despite its location in international waters, I can attest to the most appallingly bad behaviour displayed by especially Sweden, but also Finland and Estonia to prevent meaningful in situ research.

Despite this interference we were able to produce some unquestionably significant and scientific evidence of causality that in turn the authorities have chosen to ignore. 852 lives were lost in a terrible catastrophe, totally to be glossed over by related governments.

So we come back to the Lusitania, a hugely historic wreck being commemorated in this 100th year following the sinking. Sure it’s a nice round number, but isn’t that number meaningless if one doesn’t know or wish to know the truth about the incident?

There is a museum under construction at the Old Head of Kinsale, which is certainly one of many possible locations for artefacts which could be recovered to honour and commemorate this turning point in European history. Does the UAU prefer to let these artefacts self-destruct in the turbulent ocean 300 feet down?

To repeat, there appears to be a huge double standard relative to meaningful research on airplane versus ship wrecks. Irish people seem happy to let it stay that way even in this centenary year of the sinking of the Lusitania.

F. Gregg Bemis Jr is Owner and Explorer of the Lusitania