Lough Derg the leveller, a pilgrim place with its own vocabulary, culture, ethos

‘There are no short cuts on this tiny island’ 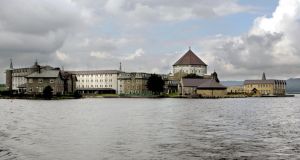 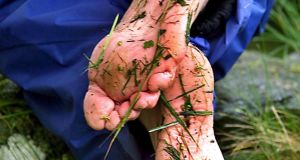 A bare-footed pilgrim in prayer, on the three-day pilgrimage at Lough Derg. Photograph: Eric Luke

Lough Derg in Co Donegal is a unique place in the world of pilgrimage. It attracts people from all over the world, rich, poor, politicians, the powerful, people of all religions and of none.

It has its own vocabulary: “the stations”, “the beds”, “the vigil”, the “water’s edge”. It has its own culture and ethos too, which is best exemplified by the encouragement, compassion and support pilgrims give each other. The pastoral and professional teams are a help but Lough Derg is a pilgrimage you do on your own. There are no short cuts on this tiny island.

The three-day pilgrimage is a challenge. You are often cold, hungry, weary and tired, in your bare feet, and when you are on the move for 24 hours without sleep the mask sometimes drops and people speak their mind.

Over the years I have met interesting pilgrims there and was privileged to share real life stories with them. One year I shared a cubicle in the dormitory with three men from the Traveller community, listened to their stories and appreciated their point of view.

Exhausted after the vigil, and within 10 minutes of Benediction and night prayer, I was horizontal in the duvet. Lights were out at 10.30pm but they continued with their stories. Towards midnight the subject changed to the post-Lough Derg meal. I could soon smell the rashers and sausages, the fried eggs. I said to myself “no wonder this place is called St Patrick’s Purgatory”.

More recently I was sitting by the edge of the lake watching the pilgrim boat come in when I noticed four very big guys disembarking. They were well laden with facial jewellery, tattoos, multi-coloured hairdos and gear to match. If I saw these lads late on a Friday evening I’d be inclined to cross to the other side of the street. A few hours later I was intrigued at the reverence with which they presented the gifts at evening Mass and led us in the Prayers of the Faithful.

I am still endeavouring not to be judgmental.

I met a Hindu man from Nepal there. We exchanged pleasantries on the short voyage from the mainland. He had heard about this “holy place” and was determined to “do it”.

He was meticulous about everything and when we had to read all the prayers I was glad I knew them by heart. We agreed to dine at 5.30pm. We talked about Mass and the Eucharist.

He was determined to partake of everything. The Sacrament of Reconciliation presented a problem though - “What do I say?” The strategy I advised was “just tell the priest why you came to Lough Derg and that you’d like a special blessing”. He received just that when the priest placed his hands on the man’s head.

In the early 1980s I met two Englishmen there. During the vigil we had a 3am conversation trying to solve the problems of Northern Ireland in the cold, the rain, and in our bare feet. Not a good idea.

One of the Englishmen in particular, who had been to Marian shrines all over the world, who had walked the camino and prayed in Taizé, was adamant that Lough Derg was the only real pilgrimage. Everybody was treated equally, with no four star accommodation, no fast tracking, he said. You just took your turn and did the stations.

When we got back to Dublin afterwards my partner and three small children were waiting at Busáras. We gave the Englishmen a lift to the airport. My then two-year-old daughter’s birthday was the following day, August 6th, and the conversation was all about her party. One Englishman expressed an interest in going, only to be told by my four-year -old daughter that he was “ a silly billy” as it was “only for little people”.

I can still hear the laughter from the back seat in response. At the airport, as we bade our farewells, one of the Englishmen told me he was the duke of Norfolk.

Lough Derg is for everyone. Don’t just Google it, visit it and do the pilgrimage. You might be surprised by the pilgrims you’ll meet there.

John Lynch is a retired primary school principal who lives in Dublin’s Castleknock. The three-day pilgrimage season continues at Lough Derg until August 13th next, with the one-day retreats resuming there on August 17th. Further details at www.loughderg.org