Liam Cosgrave: My Part in His Downfall – An Irishman’s Diary about the 1977 general election 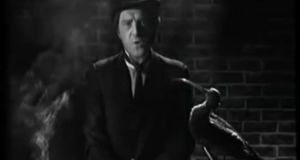 Eamon Morrissey as the “Minister for Hardship”

Sadness at Liam Cosgrave’s death this week was accompanied, in my case, by a vague feeling of guilt. This was because it brought back 40-year-old memories of the part – small but culpable – I played in his political demise.

I was of course a mere child at the time. And as explained at the subsequent war crimes tribunal, I was only obeying orders. I grew up in a Fianna Fáil household, one of a county councillor’s seven children. A certain amount of envelope-licking was expected from us in return for food.

But on the day of the 1977 general election, I played a more active than usual role in the infamous Fianna Fáil machine: one that was crucial to what we called “getting the vote out”.

That phrase is telling because, back then, in rural Ireland, voter preferences were still generally inherited.

Apart from a few eccentrics – the kind of people who read The Irish Times – you knew in advance how everyone locally would vote, assuming they did.

This last bit was the crucial thing. A fleet of cars was on standby throughout the day to ensure that anyone minded to vote correctly was not prevented from doing so by remoteness of location, or a shortage of transport, or indeed by a general lack of enthusiasm for the democratic process.

My job was to sit outside the polling station (this was before such areas became campaign-free green zones) with a copy of the voting register. As each elector arrived, I would draw a line through their names, just as the actual polling staff still do.

By about tea-time, the identities of those who had not yet embraced the gift of enfranchisement was being studied closely. If they were confirmed supporters of the other crowd, their abstention was to be welcomed. If they were not but had a good excuse – being dead or hospitalised, for example – they were also beyond our concern.

If, however, there were known members of the faithful yet to vote and devoid of an alibi, a car (possibly a Hillman Hunter, which was well named for use in Drumlin Country) would be dispatched to get them in.

Strange to say, despite such thoroughness, I don’t recall much optimism in the camp that night. It had been the last election campaign before opinion polls, and the Dublin media seemed convinced that Cosgrave’s coalition would win another term.

But I remember a neighbour of ours who happened to be both a garda and a greyhound owner, and for both those reasons was always in close contact with the dogs in the street, dismissing my father’s uncertainty. “It’ll be a landslide,” he said. And he was right.

If it wasn’t already notorious then, the Fianna Fáil manifesto – inspired, apparently, by the economic theories of Santa Claus – was very soon discredited. My penance for having helped promote it would include reaching adulthood in the 1980s and spending several years in a Dublin bedsit, reading Irish Times editorials about how grim the situation was.

But I can probably console myself that Mr Cosgrave would have been condemned to his epic political retirement even without the likes of me.

He had the misfortune to be in power during an extraordinarily difficult time, dominated by the Troubles and the oil crisis. And then there was what I suspect was his ultimate political nemesis, Hall’s Pictorial Weekly.

I also felt guilty this week remembering how much we used to enjoy Eamon Morrissey’s portrayal of him as the “Minister for Hardship”, a spectral figure announcing the latest round of austerity from behind a sputtering candle in a dark room with the wind howling outside.

Had the 1977 election not blown his candle out prematurely, the character might have become a Beckett-like addition to Morrissey’s brilliant one-man shows on Joyce and Flann O’Brien. To that extent, the actor may have been one of the election’s losers too. But the portrayal was highly influential while it lasted.

Many years later – probably around the time Frank Hall died in 1995 – I had to gather political reaction to the news at short notice. Among those I spoke to then was Garret FitzGerald (or “Garret FitzGurgle” as HPW called him), one of four successors as taoiseach that Cosgrave would outlive.

Garret sounded a bit pained at the memory of the programme. And he had clearly not been a big fan, finding the satire somewhat less than Swiftian. But as he said, with a regretful tone that he might also have applied to opposition in general, circa 1977, “it was undeniably popular”.

1 Mother and five children sleeping in car while seeking accommodation
2 Donald Trump is an amateur populist – the real trouble is yet to come
3 Mary Trump: The inside story of why she wrote a tell-all memoir
4 Twenty-six pubs could be prosecuted for breaches of Covid-19 regulations
5 On your bike: Good-value areas to buy a home a short cycle from central Dublin
Real news has value SUBSCRIBE