To the power of M 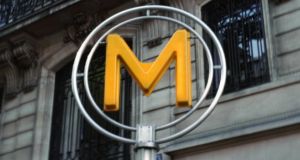 ‘Back in the real world, meanwhile, M is surely among the most successful stand-alone consonants. Witness its use in the classic Metro signs of Paris, or the infamous yellow arches of McDonalds (which, as all parents can testify, exert a magnetic attraction on children, like the giant maternal bosoms they resemble).’

Why is it that so many speakers, when stuck for a word or otherwise hesitating, resort to pronouncing the 13th letter of the alphabet? “Em”, I mean. What is it about this mystical sound that makes it so appealing?

It’s not a habit common to all languages, I know. If fact, even in English, there’s a whole generation of people now (and several generations in Cork) who use the word “like”, exclusively, for the same purpose. So maybe “em” will die out, eventually.

But for now, it remains hugely popular, especially if you include its American cousin “um”. And if “Om” is allowed, as Buddhists and Beatles fans will know, its use extends to much of Asia, albeit not as the sound of hesitation, but as a deliberate mantra, recreating the resonance that Hindus and others believe accompanied the dawning of the universe.

Religion aside, it might well be just the sound’s natural resonance that makes it so soothing at times of self-doubt. Yet there does seem to be a belief, even among the unspiritual, that making M-noises is also an aid to concentration. After all, the official sound of a person engaged in thought, as certified by cartoonists, is “Hmmmm”.

Samuel Beckett was profoundly attached to the letter M: “the fundamental sound,” as he called it. Several of his book titles start with it, including Murphy, Mercier and Camier, Molloy, and Malone Dies. Conversely, in How It Is, his characters have names that end in M: Pim, Bom, Bem, and Pam. As the author said: “one syllable m at end all that matters”.

Pointing out these and other Ms in Beckett’s work, the writer and blogger Gary Dexter asks: “Shall we wax psychoanalytical?” Then he does so wax, arguing that the central M in Beckett’s life was his mother May, with whom, even by the standards of Irish mother-son relationships, his was unusually intense.

Devoted but stern, and subject to fits of anger and depression, May Beckett shaped her son for both good and bad. “I am what her savage loving has made me,” he said. Thus, suggests Dexter, all those Ms: “Perhaps it was the sound, recapitulated in self-torture of ‘Mama’.” If you think that’s stretching a point, bear in mind that Beckett is not the only writer to have been so analysed. Consider another (semi)literary M: the head of the secret service in Ian Fleming’s James Bond novels.

There has been much speculation as to who the real-life inspiration might have been, and among the leading candidates is an Irishman: William Melville, born in Kerry but later to become first chief of the British secret service, with M as his actual code-name.

By contrast, Fleming’s biographer, John Pearson, has noted that, as a child, the future author “often called his mother M”. So cue an alternative theory.

Fleming’s mother, suggests Pearson, was “one of the few people he was frightened of, and her sternness towards him, her unexplained demands, and her remorseless insistence on success find a curious and constant echo in the way M handles [...] 007.”

Still with literature (just about), I’m told that Dan Brown’s The Da Vinci Code also revolves around the same letter. Specifically (and, in case you’re not one of the 3.5 gazillion people who’ve read the book, but still plan to, this is a PLOT SPOILER alert), protagonists identify a mysterious M-shape at the centre of Da Vinci’s Last Supper, and decide it stands for “Mary Magdalene”, or “Matrimonio”, or both. Hint, hint.

Back in the real world, meanwhile, M is surely among the most successful stand-alone consonants. Witness its use in the classic Metro signs of Paris, or the infamous yellow arches of McDonalds (which, as all parents can testify, exert a magnetic attraction on children, like the giant maternal bosoms they resemble).

Far from bosoms, in fact, the original M was a pictogram for water. And according to my Dictionary of One-Letter Words (it’s sad, I know, but I really have one), the writer Victor Hugo noted that it could also visually represent mountains “or a camp with tents pitched in pairs”.

Which brings me to Slane this weekend, where thousands of people will gather to see a certain Marshall Mathers, better known these days as Eminem: a simple contraction of his initials. Or is it? I don’t want to read too much into this. But he too has had a famously intense relationship with his mother: dating from the very start, apparently, when he was born – speaking of contractions – after a 73-hour labour.