Not all men are abusers. But too many men rape, or condone rape, or blame the victims 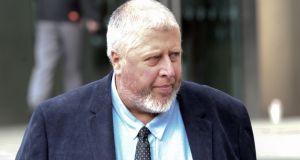 Tom Humphries (54) of Sutton, Dublin, arriving at the Criminal Courts of Justice. He has been sentenced to two-and-a-half years in jail for grooming and defilement of a child. Photograph: Collins Courts

He knew what he was doing. “Sport, with … its opportunity for building relationships between coaches and participants, is a fine feeding ground for those few sick minds who prey on kids,” he wrote in 1998, taking possession of the high moral ground. “No amount of extra trouble in screening coaches and enforcing guidelines and watching our kids is too much to avoid the grim spectacle of wrecked lives.”

Make no mistake about Tom Humphries. This was no fine man who made a tragic mistake and is to be pitied for his fall from high social standing. This was a cold, calculating predator, arrogantly using his position, covering his tracks. Nor, of course, is he a monster, requiring a cage. He’s a man. A white, middle-class man.

Here the clamour begins: Not all men are rapists! Note: I did not say so.

Feminists have had to explore this painful territory over and over. Sexual violence by men against women and children is rife in this country, as it is globally. Yet each time a case like this one comes into the public domain it is treated as if it were an aberration.

Remember that if the Director of Public Prosecution appeals the shocking leniency of this sentence, she will be able to do so because the law was changed in 1993 after brave, hurt young Lavinia Kerwick protested that her voice had not been heard after the damage done to her by a rapist was compounded by a low sentence and ignorant judicial words.

Remember also the X case rapist, freed far too soon and able to carry out a sexual assault on another teenager. Warnings about recidivism voiced by the Rape Crisis Centre and others with similar expertise were ignored. Remember Fr Brendan Smyth? Protected for years by his church. There are too many notorious cases to list, and we know that most cases don’t even get reported to the police.

The most important words are those of the young woman whose evidence got Humphries prosecuted. She is now 23, and was 14 when the abuse started. It left her, she said, “physically, emotionally and mentally ill”. She was suicidal. She lost her childhood. She felt her life was ruined. “I have never felt as low and small about myself ...” Those words freeze the soul. There is something profoundly and fundamentally wrong with a culture in which women who have been subjected to sexual violence feel shame. Shame that all too often leads to silence, to self-destructive behaviour, to suicide. When Humphries first spotted this girl she was a child just entering into adolescence. He knew what he was doing. She did not know what he was doing, until she was trapped. It is moving to note that she thanked Humphries’ family for their support. It was his daughter and her mother who exposed him.

I was once sent to try to interview a man who had raped his daughter over many years and had finally been jailed. A prison guard asked me who I was there to see. When he heard the name, he said it was a terrible case. I agreed it had been horrific for the young woman. He shook his head. Oh no, he said. There was more to that than meets the eye. That was “a two-way relationship”.

Excited by her age

The writer Rachel Moran was prostituted when she was 15. She wrote a fine book in which she reveals a great deal about sexual violence and the shaming of women. She wrote that when she told men her age, she found that many of them were sexually excited by this, so she took to doing so in order to get the whole thing over with more quickly. Other women in prostitution have commented on how often they are asked to dress up as “sexy schoolgirls”. Irish men are among the sex criminals who travel to Thailand to rape children, for the most part with impunity.

“When we say most rapists are men, men hear, most men are rapists,” Rachel Moran told me. She is right. Of course, if it must be said: not all men are rapists. But a lot of men rape, or condone rape, or harbour views that somehow manage to blame the victim for the crime. Men have got to get past this self righteousness and start talking about why men, some men, any men, get sexual pleasure out of dominating and inflicting violence on women and on children. Personally, I reckon it has something to do with inequality.

Susan McKay has written extensively about gender-based violence, including the books Sophia’s Story and Without Fear

FG and class politics
Cyclists and bells
An unruly US presidential debate
The ghost in the machine
Island life
Fine Gael is full of very ordinary people
Dignity and the end of life
It’s no mystery why doctors are leaving
We need Covid-19 statistics for schools
Cyclists, ring those bells

1 How one couple’s weekend away resulted in 30 Covid-19 cases
2 Taoiseach tells TD to ‘cop on’ over criticism of contact tracers asking about pubs
3 Coronavirus: 429 new cases as vigilance urged amid rises across the country
4 Miriam Lord: Government’s latest comedy of errors offers little to laugh about
5 Pierce Brosnan’s Malibu mansion on the market for $100 million
Real news has value SUBSCRIBE