Kevin O’Rourke: Britain wakes up to the reality of free trade

With the unravelling of an agreed form of wording on the Irish Border the deadline for phase one of the Brexit talks is looming ever closer. Cliff Taylor reports 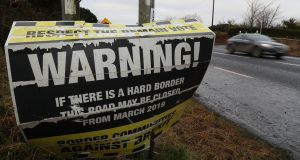 Sign of the times: “Unless both Northern Ireland and the Republic retain equivalent regulations regarding both customs duties, and what can be legally bought and sold on their territories, the result will inevitably be border controls.” Photograph: Brian Lawless/PA Wire

Following the dramatic events of this week, the British public is finally having to come to grips with some basic trade-policy distinctions which can no longer be ignored by either the House of Commons or the UK government. Chief among these distinctions are those between free-trade areas, customs unions, and the European single market. All three concepts are well illustrated by the history of Anglo-Irish trade relations since independence.

As Peter Leary’s recent book, Unapproved Routes, reminds us, the Irish Free State left the UK customs union in 1923. Customs posts immediately appeared along the Irish Border. Nor did they disappear with the signing of the Anglo-Irish Free Trade Area Agreement in 1965. The UK abolished most tariffs on Irish exports, while Ireland started reducing tariffs on UK imports. But while Ireland had agreed to reduce its tariffs on imports of British goods, it had not agreed to reduce its tariffs on imports from elsewhere. How could one distinguish between imports of British and Australian lamb, for example?

John FitzGerald tells the story of how an Irish delegation to London requested that British goods exported to Ireland be clearly labelled “Made in Britain”, or words to that effect. UK Labour politician Denis Healey asked, with some irritation, whether he was supposed to stamp “Made in Britain” on the balls of every bullock shipped to Ireland, to which former president Paddy Hillery’s retort was that bullocks don’t have balls. The anecdote is pedagogical in many ways, and provides us with an early illustration of a technological solution to border frictions that – with the best will in the world – could never have worked. Free-trade areas always and necessarily involve border checks, to ensure that goods from third countries are not given the preferential treatment enjoyed by countries party to the agreement.

From 1973 onwards, Ireland and Britain were members of the European Economic Community (EEC), and more particularly of its customs union. Customs unions don’t just abolish tariffs between member states: they surround those member states with a common external tariff. By adopting a common trade policy, there is no need to check whether beef entering Ireland from Britain originated in that country or somewhere else. No matter where the beef is from, so long as it entered Britain legally it will have paid exactly the same tariffs as would have been due had it been imported directly into Ireland.

There was thus no further need for customs-related controls along the Border. But border controls persisted. EEC members retained the right to set a variety of regulations regarding what sorts of goods could be legally sold on their territories, implying the need to check whether importers were respecting these rules. The “1992” or single market programme thus ensured that what could legally be sold in one country in the bloc could be legally sold in all. By definition, this required the common regulations that are at the heart of the European single market for goods. And so, on the 1st of January 1993, the final systematic trade-related border checks between Ireland and Northern Ireland ceased, a local reflection of what was happening right across Europe.

The Belfast Agreement was a masterpiece of constructive ambiguity. It worked because that ambiguity influenced how people felt about where they lived and their place in the world. But there is no such thing as a constructively ambiguous customs border: either goods are subject to the same regulations, or they are not.

Language can soften things. According to this newspaper, the agreed deal that London subsequently walked away from stated that, “in the absence of agreed solutions, the UK will maintain full alignment with the internal market, customs union and protection of the Good Friday agreement.” A lot has been made in the British press of that word “alignment”, as opposed to “no regulatory divergence”, even though Taoiseach Leo Varadkar has said that both terms effectively mean the same thing. Perhaps “alignment” implies that the UK (or maybe only Northern Ireland?) can choose to align itself with the EU, thus preserving agency of some sort. But this is a distinction about process, not outcomes.

In a rapidly evolving situation, there have been suggestions that regulatory alignment will only be required in some sectors, and that such sectoral alignment could be extended across the UK. The former assertion seems incorrect. All traded goods will have to be covered if a hard Border is to be avoided. Furthermore, if the UK were to strike such sectoral deals with the EU, both the UK and the EU would be in breach of their obligations to other World Trade Organisation members not to discriminate against their exports. This obligation can only be waived in the context of free trade agreements covering “substantially all” trade.

If the Irish Times report on the deal is accurate, the British have moved a huge distance, suggesting that they badly need a deal. This week’s drama, on the other hand, will make the EU even more reluctant to consider bespoke negotiations and even more determined to offer only off-the-shelf arrangements.

I don’t want to count my chlorinated chickens before they’ve hatched: a catastrophic no-deal Brexit is still very possible. Maybe the UK government will collapse, and then who knows what will happen. (If London cannot decide what it wants from Brexit this may be what is required.) But given the season that’s in it, and putting everything together, you begin to wonder whether “it’s beginning to look a lot like a customs union and single market”. Here’s hoping.