Kathy Sheridan: The closure of Clerys – when the shutters come down

‘Companies are ridiculously easy to set up, yet are granted all the enormous, attendant privileges of limited liability’

Staff of Clerys were joined by family members and supporters outside the O’Connell Street, Dublin store in support of the workers who lost their jobs when the company went into liquidation last Friday. Video: Bryan O'Brien 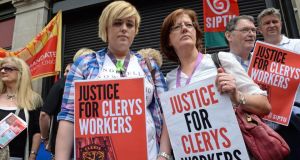 Clerys workers Emily McDermott and her daughter Nathania, at the demonstration in support of Clerys workers, outside the store in O’Connell Street, Dublin. Photograph: Eric Luke / The Irish Times

There is something magical about the combination of money and the law.

When Gayle Killilea argued in a South African court that she needed the money from the €19 million sale of a Cape Town hotel to buy a €7 million property in the UK, the judge ruled against her. He decided in favour of the official assignee in her husband’s Irish bankruptcy, who had applied to seize the proceeds from the sale.

It was “overwhelmingly probable”, he said, that Killilea had other sources of capital since she had found the money somewhere else for a £1 million deposit as well as another quarter of a million to renovate the UK property. But ultimately, he ruled against her because he believed efforts to trace the flow of proceeds from the hotel sale would be “nigh impossible”. That was due to “the ease with which funds can be transferred internationally, privacy of banking transactions and the fact that Mrs Dunne controls a network of companies registered in multiple jurisdictions”.

It’s how the special people roll. Seán Dunne is bankrupt on two continents, with debts of €700 million (including about €250 million to Nama). But magically, there is a wealthy spouse, with a cosmopolitan outlook. There are plenty of them.

For contrast, have a look at O’Connell Street, Dublin, last Friday. At lunchtime, Clerys’ staff were told the department store had been sold. Four hours later, KPMG liquidators were in the building, declaring – pfoof! – that around 460 livelihoods were up in smoke. It’s business, folks. Nothing personal. The new owners of the building Natrium Ltd – D2 Private and Cheyne Capital Management, funded to an unknown degree by US-based Quadrant Real Estate Advisors – spoke to no one and have no obligation to. It’s as neat an example as we will ever see of capitalism red in tooth and claw.

In 2012, Clerys was in bank receivership. Gordon Brothers, a US private equity group, bought it though a subsidiary called OCS Investment Holdings, which spawns two other companies: OCS Operations to run the store and OCS Properties to operate the lease. Together they formed the OCS group of companies. This is normal. Under Irish law, every company has its own legal personality and is treated as such by the court. But after less than three years in business, Gordons sold the business to Natrium.

At 2.30am on Friday, Natrium buys the OCS group, hives off OCS Operations from it, transfers the shares in that company to a London-based insolvency practitioner for €1. Unhappy with the financial projections for next August, the parent company, now owned by Natrium, refuses any further loans to OCS Operations. This severs its lifeline. OCS Properties then refuses to renew OCS Operations’ expired lease. The UK insolvency practitioner then asks the Irish High Court to place it in liquidation. Simple. The legalities are done and dusted in about 12 hours, all completed behind the backs of the staff, and all perfectly legal.

We mustn’t be naive, we are told. If the new owners hadn’t moved swiftly for liquidation, debtors would have been hammering down the doors. Customers owed vouchers or cash orders can go sing for it probably. Business means never having to say you’re sorry. Gordon Brothers’ minimal statement described Natrium as a “real estate company”. There is talk of a hotel, offices, shops, the usual. Perhaps they intend to do justice to that iconic building, opposite the GPO. Either way, there is little point in shouting rude words at them. It is their nature.

The Clerys property play is from the same freebooting system that plunged this State into a decade of misery and left us with a debt we can never pay off. The same system where companies are easy to set up, yet are granted all the enormous, attendant privileges of limited liability. The system where such companies can operate in an orderly, reputable, business-friendly environment, one fostered, suffered for, and paid for by the citizen. Yet we ask for no quid pro quos, no framework in which owners are required to commit to companies over time, no contracts with staff that are not capable of being broken.

1 A Ryan Tubridy interview takes a terrifying twist
2 Des Bishop: ‘The last time my mother spoke was to say sorry’
3 Dublin house deaths: Three young children named
4 Some get up early to go to the gym, others because they slept in a doorway
5 Returning from Australia, I barely recognise my hometown
Real news has value SUBSCRIBE