Rite&Reason: Trust is key to partnerships between civil society groups and the State 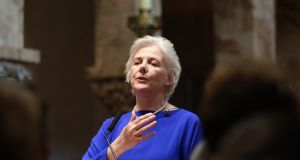 The country owes a debt of gratitude to voluntary organisations involved in healthcare. That was the conclusion of the recent report of a review group on these organisations, chaired by Catherine Day (retired secretary-general of the European Commission), which praised such bodies for their innovation, flexibility and independence.

It also highlighted the need to put the relationship between the State and the voluntary sector on a clearly defined basis, in keeping with citizens’ expectations. Previous official reports have sometimes seemed uncertain about the role of voluntary bodies in healthcare.

A 2012 strategy document did not include voluntary providers specifically among its healthcare stakeholders, while the cross-party report, Sláintecare, praised the advocacy role of many charities but also called for the divestment of section 38 and 39 healthcare voluntary bodies “over a reasonable period”.

Discussion about healthcare today often focuses on the role of the State or the market but tends to neglect alternative frameworks such as the subsidiarity principle.

It deserves a fresh look at a time when our health and social services are under such great strain and considerable thought is needed on the way forward.

Subsidiarity is essentially about the freedom of individuals and groups to contribute to society. It thus explains the “value-added” of voluntary bodies, to which the Day report refers.

The principle can be traced back to ideas of freedom and responsibility in Aristotle and was presented in the Catholic Church’s Compendium of Social Doctrine as one of four interconnected Catholic social principles, along with the dignity of the human person, the common good and solidarity.

Solidarity is the determination to commit oneself to the common good while subsidiarity seeks to safeguard the extensive network of relationships in civil society.

For understandable reasons, including the grave historical abuse scandals, subsidiarity has had a bad press in Ireland. A previous subsidiarity-influenced atmosphere was seen as contributing to a lack of governance by the State in services such as institutional childcare or as impeding the development of a comprehensive welfare state here.

While some earlier advocates of subsidiarity had negative views on the role of the State in welfare, perspectives have evolved over the years.

The Italian proponent of subsidiarity, Stefano Zamagni, has highlighted the State’s duty to define a set of guaranteed social services as well as related quality standards but adds that the State or the market should not undertake what can be better achieved by “reciprocity” or initiatives coming from civil society.

Subsidiarity doesn’t offer prescriptive guidelines on the role of the State and on voluntary bodies in service provision. It does suggest, however, that a “bottom-up” approach to policy priorities has considerable merit.

This means that policymakers should start by looking at the services already developed by civil society, and try to build on those before devising ambitious plans for the future.

The Day report was arguably in harmony with such a vision in that it looked at current voluntary organisations and consulted with them, gave a detailed account of their ownership and governance arrangements, and offered various ideas for integrating their work and that of the State.

These included the public recognition of voluntary bodies through a charter and the establishment of a forum to facilitate State/voluntary dialogue.

A “bottom-up” approach might also include an emphasis on the views and wishes of citizens and service users or putting the patient/service user at the centre of the system.

Subsidiarity theorists in other countries have sometimes recommended that money “follow the user”, for example, through vouchers that offer citizens/users a choice in various social services or through tax exemptions on contributions to civil society organisations, so that the preferences of users are reflected in how resources are allocated.

Another useful implication of the subsidiarity principle is its endorsement of partnership between voluntary organisations and the State.

That is, it acknowledges the key role of the State but also highlights the critical contribution of bodies coming from civil society and advocates a relationship between such bodies and the State that is based, as the Day report put it, “on trust, partnership and mutual recognition of need”.