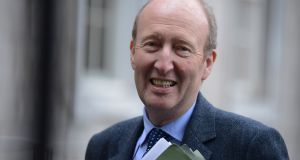 Isn’t it grand to see the confidence of some of the newbies in the Dáil? In situ just a few months and already Sean Canney, the Independent Alliance TD for Galway East, has concluded that a couple of terms will suffice to achieve everything required of him as an office holder and presumably, every political goal he has mapped out for himself.

After that, Canney says, somebody else should be allowed to “have a go at it and see can they better that or can they bring a fresh approach to things, because everything evolves, including politics”.

He attributes this luminous confidence to his long service as a county councillor; the kind of invaluable experience that allowed him to take on the big boys and girls during government negotiations, he told the Irish Examiner.

In truth, Canney was quite amazed to discover how far ahead he was of some Cabinet big beasts; after all, he came away with a 14-month junior ministry job-share with Moran over the OPW and Floods.

Such cockiness from an untested junior minister so early in the game is worrying, but perhaps to be expected. When Lady Luck rushes a fellow from the council chamber into the frantic embrace of a party desperate to make up the numbers, the intricacies of government and law probably look easy-peasy. Just ignore that happy gleam in Sir Humphrey’s eye.

So Canney must be quite baffled at his leader’s predicament in recent weeks. Why, for example, did Shane Ross’s eight years on Wicklow County Council fail to equip him to deal effectively with the OCI ticketing scandal in Rio?

Anyway, after eight years on the county council, nine Seanad terms and counting down his second Dáil term, Ross is headed for the political dustbin in 4½ years max if his Independent Alliance mate gets his way. So is the Anti-Austerity Alliance’s Paul Murphy. Under the Canney rule, Leo Varadkar would already be gone.

Now, what are the chances?

On the face of it, ejecting political dead wood is most attractive. Many constituencies boast an immovable drone who has hung in there for four terms and more. They may rank among the great sorrowful mysteries of our time, but that’s electorates for you. On the other hand, Seán Lemass finally made it to taoiseach after more than 30 years in the Dáil. Even if Canney were speaking only of ministerial terms (a more interesting idea), would he stand over the dismissal of a 37-year-old Lemass?

There are obvious arguments for limited terms, of course. The elected ones would be hungrier and more focused. And after bedding-in, they could let rip in term two, freed from concerns about minding the seat. Limited tenure would also ensure they had to have a “real” life outside politics, so therefore no careerism or Leinster House bubble.

As a bonus, limited tenure also implies minimal opportunity for corruption. You might think. So if you know you must return to “real” life in 10 years – ie acquire a new job to match the old one in pay and status – how would you approach the opportunities provided by the Dáil? With more or less resistance to powerful lobby groups, for example? A glance at just a couple of ministerial records demonstrates that they needed only two terms in the Dáil to fall for that one.

This is not to say that every TD is entitled to a job for life, just that some are risking more than others. It all comes backs to the breadth of the representation we envisage for the Dáil. It also comes back to how we perceive our politicians and, more importantly, those who elect them.

Sean Canney’s attempt to ride the political wave while scorning colleagues with hard-won wisdom and experience makes him one to watch.