Kathy Sheridan: Independent TDs need to wake up to the reality of running the country 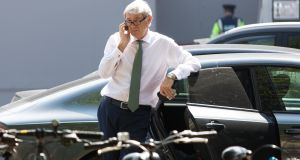 Michael Lowry: appears impatient as others battle with the Covid-19 pandemic and Britain’s flight to Brexitland, while dealing with the three-way election verdict. Photograph: Tom Honan

Politicians can make a comeback from disgrace. Of course they can. In the UK, they comprise most of the current cabinet. Our chief exhibit is Michael Lowry, former chairman of Fine Gael, then barred from the party, he was forced to resign his ministry, called to resign his Dáil seat by an all-party vote and through it all, he topped the Tipperary poll in every general election for about 30 years because he and his constituents “are faithful to each other”.

And there he was on Monday, looking relaxed and summery in a smart jacket and jeans leaning on a picturesque old bridge down the town, just another perplexed Independent of the Regional Technical Group demanding that Fine Gael and Fianna Fáil get on with it and set a deadline for a government. Why of course, Deputy Lowry, just as soon as we’ve polished off this little pandemic, war-gamed Britain’s flight to Brexitland and dealt with that really neat, three-way election verdict handed down by the people just a few weeks ago, sir. But just so you can have a wee bit of context before you decide whether to sashay back into government, Paschal Donohoe promised what RTÉ called a “warts and all analysis of the economy and its future prospects”.

1 ‘I thought it was a hoax’: Patient dies after Texas Covid party
2 US passengers fly into Dublin: ‘I’m here for six days. I guess I’ll have to stay inside’
3 Maureen Dowd: Biden has his limitations but he’s no Trump
4 Coronavirus: No new deaths and 11 further cases reported
5 Johnny Depp tells court Amber Heard threw ‘haymaker’ punch at him
6 White House turns its fire on Anthony Fauci over Covid-19 comments
7 Covid-19: Most passengers arriving from US are Irish coming home - Coveney
8 Immunity to Covid-19 could be lost in months, study suggests
9 Coronavirus crisis may get ‘worse and worse and worse’, warns WHO
10 Dublin banker sells island off coast of west Cork for €5.5m
11 Croke Park opens up pitch for Muslim prayer service
12 Mary Kenny no longer taking part in festival after questioning ‘draconian’ travel rules
13 Lidl goes to court over Aldi price survey
14 Dirty money: How the Mafia plundered Italy’s public health system
15 Aaron Brady takes stand to deny murdering Det Garda Adrian Donohoe
16 Quarantine process to be tightened as health officials grow nervous
17 Una Mullally: Phoenix Park travesty is a litmus test for the Greens
18 Thandie Newton names names. Will Hollywood punish her?
19 Eleven plead not guilty to exploitation, neglect and sexual abuse of four children
20 Elvis Presley's grandson dies aged 27
21 Thomas Byrne denies being source of Barry Cowen drink driving story
22 Covid-19: Restrictions on travelling abroad may last several years, expert warns
23 Covid-19: ‘Too many countries are headed in the wrong direction,’ warns WHO
24 Georgia and Fiji in line to join Six Nations sides in eight-team tournament
25 50 best Irish albums of all time – in order
26 Forget bulging muscles; strength is all about nerves
27 Back with our old friends at eir – and nothing seems to have changed
28 High compliance with rule making face coverings mandatory on public transport
29 Number receiving coronavirus unemployment payment falls by 67,000
30 ‘It’s not normal to go to the toilet 15 times a day’
31 Will Revenue come calling with tax bill if inheritance tax threshold falls?
32 Majority of employees don’t want to return to pre-Covid working patterns
33 First Look: Dig In, the Maser-curated ‘art diner’ that’s about to open in Dublin
34 ‘No live music’: Three words that strike at every musician’s soul
35 Cork shopping centre in €30m case after car goes on fire
36 ‘He’s so strapping and virile’: Patrick Stewart at 80, by Shatner, McKellen, Grammer and more
37 Irish Times Summer Nights Festival day 1: Dermot Bannon, David McWilliams, Marian Keyes
38 ‘People took their masks off as soon as the inspector passed’
39 Cairn Homes housing plan for ex RTÉ land in Donnybrook draws 19 objections
40 Ken Early: Another Mourinho masterclass in going through the motions
Real news has value SUBSCRIBE