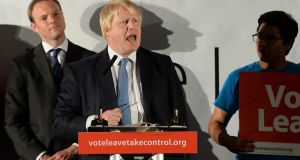 Ignorant, narcissistic, cartoonish machismo is spreading its contagion across the world. Boris Johnson’s comparison of the EU to Hitler-style imperialism is just a case in point. Photograph: Stefan Rousseau/PA Wire

Monitoring the Brexit “debate” is a peculiar form of torture, but amid the cacophony of noise one line jumped out at the weekend: “democracy depends on people behaving reasonably well”. That was 85-year-old Shirley Williams, one of the great British politicians of her generation.

The “people” are the vociferous liars who have commandeered the Brexit discourse, fuelling the shouting and simplistic slogans that pass for debate around the “mother of parliaments”.

Williams’s line will bore the Union Jack pants off thrusting young Tory Brexiteers, such as the school-leaver over on Radio 4 yesterday who said he would take “no lecturing” from the treasury, then confidently admitted he had not acquainted himself with the facts and figures.

Addressing graduates some weeks ago, Barack Obama delivered a warning about the culture of falsehood and wilful ignorance, about leaders and commentators who reject science and facts.

The schoolboy on Radio 4 is not ashamed of his ignorance because his gut takes precedence, just as his male, white, middle-aged role models advise.

Meanwhile, a pro-Brexit Tory MP, quoted anonymously in the Sunday Times, had this to say about his party leader and prime minister. “I don’t want to stab the prime minster in the back – I want to stab him in the front so I can see the expression on his face. You’d have to twist the knife, though, because we want it back for [George] Osborne . . . All we have to do is catch the prime minister with a live boy or a dead girl and we are away.”

To this cohort the virtues that are obvious to Obama and Williams are evidence of political naivety. When Williams talked calmly about campaigners telling “untruths”, her fellow panellist snorted wearily “but it’s politics”.

Sadly, it’s far worse than that. This is the same strain of hyper-masculine political rhetoric that has the world in a chokehold.

In 2014 the breadth of his political maturity and of then Australian prime minister Tony Abbott was on show when Abbott threatened to “shirtfront” him (an Australian Rules term for roughing up an opponent), upon which the Australian leader was reminded that Putin was “a professional judo wrestler”.

This jolly exchange had its origins in the shooting down of a plane by Russian separatists with the loss of 298 lives, including many Australians. Boys will be boys.

Reality TV star Trump, currently touring the US with his own bear-wrestling show and strange hair, promises to be besties with Putin while demonising minorities, encouraging fans to punch protesters and provoking comparisons with Hitler and Mussolini.

Whether Trump is a fascist or just a demagogue – one who gains power by arousing people’s emotions and prejudices – is arguable. Americans may find out the hard way.

Meanwhile, that ignorant, narcissistic, cartoonish machismo is spreading its contagion across the world. Boris Johnson’s comparison of the EU to Hitler-style imperialism is just a case in point.

Some claim to find all this highly entertaining. Sure, that’s just Boris/The Donald – isn’t he hilarious?

But there is something disturbingly familiar about this unleashing of male power and ego. It is not paranoid to perceive menace in the macho posturing and language. We hardly need to recycle the trash talk of penis size and wife comparisons that ensued among grown US males vying to become leader of the free world.

That’s the same free world that boasts EU hopeful and all-round strong man Recep Tayyip Erdogan, president of 78 million Turks, who has decreed that “no Muslim family” should consider birth control or family planning. “The first duty belongs to mothers.”

We know that language.