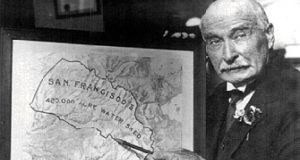 M.M. O’Shaughnessy: presided over a series of epic infrastructural projects

In the 2008 “stoner” comedy, Pineapple Express – the title referred to a new, supposedly powerful strain of marijuana – there occurs a typically out-of-focus conversation that combines the subjects of recreational drug use and civil engineering.

It coincides with the construction by Saul Silver (played by James Franco) of a “cross-joint” – two home-made cigarettes threaded through each other in such a way as to create a four-ended structure of which three ends are lit – which he assures his friend Dale Denton (Seth Rogan) is the ultimate smoking experience . Then he adds: “It’s rumoured that M.M. O’Shaughnessy designed the first one – the guy who, uh, designed the Golden Gate Bridge”.

The reference here was to Michael Maurice O’Shaughnessy, a Limerick man who did not in fact design the Golden Gate Bridge, although as city engineer of San Francisco, he commissioned the project and did many other remarkable things, to which we’ll return.

But as for his alleged innovations in dope-smoking, this appears to have been a misunderstanding. Saul Silver was almost certainly confusing two different O’Shaughnessys, both born in the 19th century, and both from Limerick. For a stoner, especially, the confusion is forgivable.

William Brooke O’Shaughnessy, the man he probably meant, was a physician mainly, although he distinguished himself in other fields too.

Born in Limerick in 1809, this O’Shaughnessy spent much of his career in India, where he oversaw construction of that era’s internet, the telegraph network. Back in England, it earned him a knighthood in 1856.

What made him a potential hero to some residents of 21st-century Silicon Valley, however, was his earlier research on the therapeutic use of cannabis. He had studied Indian folk remedies involving the drug, then proved they could work in, for example, relieving the pain of rheumatism. In bringing his recommendations back to England, he was first to introduce the concept into western medicine.

He and the other O’Shaughnessy probably never met, although their existences did coincide for about 25 years before the former died in 1889.

By then M.M. O’Shaughnessy had already left his native West Limerick (where, as if to further confuse stoners, he had been born in a place called “Jointer”), graduated in engineering from University College Galway, and emigrated to California.

Twenty-odd years later, he was earning so much from private practice that, when the mayor of San Francisco asked him to become city engineer in 1913, it meant a pay-cut of 50 per cent. Even so, he was persuaded by his SF-born wife to take the job, six years after an earthquake had killed 3,000 and destroyed most of the city.

And for the next quarter of a century, he presided over a series of epic infrastructural projects, including the municipal railway, highways, tunnels, sewers, and a high-pressure fire-fighting system. The work was funded by bond issues, so frequent and extensive that O’Shaughnessy’s advocacy for them inspired a joke that his “M.M.” stood for “More Money”. But he was also relentless in his insistence on careful design, to keep costs under control, and in resisting political interference.

Of his greatest project, the 20-year, $100 million dollar Hetch Hetchy water scheme, he boasted that “not a crooked finger had been able to chisel a dollar out of it”.

Its cost aside, the Hetch Hetchy plan was controversial because it involved damming the valley of that name in Yosemite National Park. It also required a 68-mile-long railway and a 156-mile aqueduct, half of it in tunnels, some cut through granite. Alas, O’Shaughnessy didn’t quite live to see the epic project realised, dying from a heart attack 16 days before the water finally emerged from taps.

Whatever about William Brooke O’Shaughnessy, M.M. of the same surname would surely have been surprised to hear himself eulogised in a Hollywood drug comedy. He was by all accounts a very reserved individual and, for an Irishman, surprisingly reticent.

When the San Francisco Examiner wrote in an obituary that he was “never voluble”, this was generally agreed to be an understatement.

His works were his eulogy, the obit added, and there were plenty of those. Most notable is the O’Shaughnessy Dam at Yosemite, which still stands despite being the subject of one of the longest-running environmental debates in US history.

But the Limerick man’s legacy also includes San Francisco’s Twin Peaks Tunnel, a railway line under two hills of that name, which was the longest of its kind in the world when it opened, 100 years ago today.