John McManus: Imagine if the Panama Papers weren’t a hoax 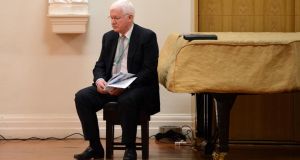 Spare a thought for Frank Flannery. He wakes up one morning and everything he took for granted has changed. The mortgage he took out in 1996 to buy a £615,000 house in London’s Primrose Hill is not what he thought.

He thought he’d borrowed money from a bank to buy the house and repaid it all by himself. Or as he put it: “In so far as I am aware I borrowed money from Bank of Ireland in London to purchase 19 Chalcot Crescent and Bank of Ireland took a first legal charge over this property, which charge I discharged in full from my own personal funds and without any contribution from any third party.”

Imagine his shock when it turns out this week that, according to the files of a Panamanian law firm, Bank of Ireland wrote to him in 1996 saying it was also going to rely on a third-party security interest agreement “to be provided by the trustees/directors of an offshore company domiciled in Jersey, in the amount of £250,000”.

A ‘stranger to the matters’

He had never heard of the company – called International Funding Promotions – was never aware of the existence of any such security agreement in relation to the loan, and was “absolutely confident” he had never signed any letter from Joe Holden of Bank of Ireland in relation to the Jersey account. He is a “stranger to the matters”. His mysterious benefactors who let Bank of Ireland use their money to secure his loan have caused him no end of trouble. Really. With friends like that who needs enemies?

It must be a deeply unsettling experience. But at least he is not alone. People across the world – from oligarchs to prime ministers – woke up on Monday morning to find themselves in the same boat.

According to the files of the Mossack Fonseca,  a law firm that nobody ever heard of before, they were the owners of assets they didn’t own and involved in deals they knew nothing about. Mysterious companies with odd names and directors who double job as office clerks in Panama were doing things that appeared to be very much in their interest without their knowledge.

It is extraordinary. It is too good to be true. It can’t be true. In fact it must all be some sort of big hoax that missed April fools by a couple of days

Vladimir Putin’s spokesman is right. It has all been made up to damage and discredit the rich, powerful and successful. The only rational explanation is the International Consortuim of Investigative Journalists and its henchmen – including The Irish Times – have spent the last 12 months fabricating 11.5 million documents – or if you prefer 2.7 terabytes of data. They have concocted an elaborate backstory about a law firm in Panama, complete with a link to the Nazis.

Something in the order of 214,488 companies, trusts and foundations have been created out of thin air and more than 14,000 “clients” have been invented in jurisdictions ranging from New Zealand to the Isle of Man. Respectable global banks such a HSBC and UBS have been expertly woven into this tissue of lies. All of this has been done to damage the leaders of 12 countries, 128 politicians and public officials, lots of wealthy people and also, it seems. Frank Flannery. I know it sounds incredible. But consider the alternative?

Do you really believe Mossack Fonseca is only the fourth or fifth largest international law firm that provides the administrative backbone of a global network used by the rich and powerful to keep their activities secret? Do you really believe most of the world’s banks, accountancy firms and other “wealth managers” are plugged into this network and make a fortune out of advising their clients how to take advantage of it?

Do you really believe this network operates in the light of day and is actually regulated by bona fide regulators in the handful of small countries which are its main centres?

Do you really believe that, by virtue of a quirk in its colonial past, the British legal system provides a safety net that gives people the confidence to entrust their fortunes to people they have never met in some tiny island in the Caribbean or Pacific?

Do you really believe your government and the governments of other developed countries would let this state of affairs exist at the cost of billions to their taxpayers?

Do you really believe they would allow this network to exist even though they know it is used to launder money, bust sanctions, facilitate corruption and kleptocracy, people trafficking and tax avoidance?

Of course you don’t.