John McManus: How does Joshua Molloy differ from the Supermarket Jihadi? 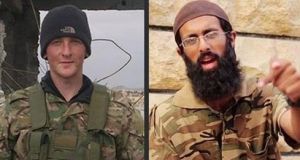 Joshua Molloy and Omar Hussain: Both born in England and both travelled the best part of 6,000km to fight in in someone else’s war.

What is the difference between 24-year-old Joshua Molloy from Ballylinan, Co Laois, and 27-year-old Omar Hussain from High Wycombe in Buckinghamshire?

Both young men went off to fight in a war that was arguably none of their concern. Joshua is Irish and Omar is British. They were both born in England and both travelled the best part of 6,000km to fight in in someone else’s war.

Both would seem to have come from stable family backgrounds. Omar told BBC Newsnight last year that his childhood was “good, nothing out of the ordinary”.

Joshua’s family are “well respected” according to no less an authority than the postmistress in Ballylinan.

Both men appear to have been thoughtful in nature and had questioning minds, which may ultimately have set them both on the path to conflict in Syria.

Omar said that when he was in school he became something of a “lost sheep”and “started to question ‘what am I doing’?” He “became progressively religious”, his friend told the BBC.

We don’t know where Omar went to school but it was most likely a non-religious state school.

However, he does not appear to have been particularly religious.

Secunder Kermani, the Newsnight reporter who interviewed him online described Omar as “ very polite and even ‘nice’”.

According to Joshua’s father he was “ a thoughtful and sensitive guy with the best of intentions . . . he was always a reader, reading well beyond his years, and liked to know what was going on in the world, and he was into the computers and music, just like any other lad his age.”

Both men took an interest in what might be termed world affairs and this also seems to have been a factor in their decisions to go to Syria.

Omar claimed to the BBC that events following the 9/11 attacks in the US and “unjust western foreign policy” were key motivating forces in his decision.

“I remember seeing the Twin Towers collapse . . . I didn’t [at first] pay much attention . . . but that triggered a long-term effect on me.”

Both men also seemed to be motivated by a selfless desire to help others suffering because of oppression and injustice.

Omar describes wanting to go to defend the “weak and oppressed women, children and elderly neglected by the West” in the war in Syria.

“Joshua felt very strongly about what was happening to the minority groups in the Middle East ,” according to his father.

Both men were also seeking adventure.

Omar describes the excitement of making his journey to Syria to do his “Islamic duty” because, he says, he was “leaving the land of immorality and going to a land of jihad”.

Joshua joined the the British army for four years when he left school “because he wanted to see the world and he wanted to be involved in it”, according to his father.

“He joined the British army and not the Irish Army because he thought he would see more of the world and get more involved.”

Both men eventually seem to have grown tired and disenchanted with war and fighting.

“The conflict had recently become a lot more complex with Turkey and Russia getting involved, and we think Joshua thought he had played his part and was coming home,” according to his father.

Omar is reported to have missed the comforts of home – including that most British of delicacies, fish fingers.

“Arabs as a whole have a unique culture, which differs dramatically from the western lifestyle,” he wrote.

Joshua, along with two British friends Joe Akerman and Jac Holmes, is being held in Iraq by the Kurdistan Regional Government after crossing back across the border with Syria to make their way home.

Omar – called the supermarket jihadi because he once worked in Morrisons, the British supermarket chain – is reported to now be in Libya with Isis.