John Horgan: Labour could be the winner in the end 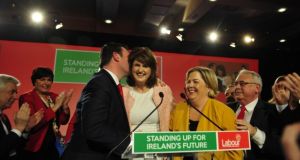 John Horgan: ‘It will take enormous stamina, youthful energy, and the ability to create or re-create a specifically Labour vision for the future of Ireland.’ Photograph: Aidan Crawley

The election has demonstrated that one of the biggest shifts in electoral attitudes – and it is one that, in spite of the devastation of last week, should in the long-term benefit Labour – is in the direction of support for public expenditure on services.

Generations of Irish politicians of all parties have become habituated to the idea that while the electorate between elections frequently expresses a desire for better public services, it seems, at voting time, to revert like a drug addict to the lure of lower taxes (which are, of course, incompatible with better public services).

This time around, Labour was, to put it mildly, dangerously insensitive to this shift in the public mood, but it is in a better position to benefit from it than many of the other parties. This is because the centre parties are essentially wedded to tax cuts and because some smaller, self- described “parties of the Left”, and some of the Independents, are millenarist or Poujadist agglomerations.

These parties have learned how to capitalise on genuine public discontent while offering nothing more appetising to voters than the destruction of the Labour Party, and an indefinite wait for the entry ticket to a socialist paradise.

All Labour Party leaders, from the late 1960s onwards, have correctly rejected the nostrum, whether from the right or the so-called left, that the poor will have to wait. This is always a reason for potential participation in government – provided, of course, that the terms are right and that the performance in government adequately reflects not only its separate identity but this core value.

So the first thing that Labour will have to do is to reflect on its performance on this score and draw whatever lessons it can from that self-reflection.

If this is true, then Labour has to devise achievable, believable policies to identify and tackle inequality in all its aspects – not only in social areas but in taxation and public investment – as part of a self-examination, and to orchestrate public support for these policies.

It will have to build alliances as well. This is not least because its DNA, and its experience of politics and government, will be not just valuable but essential to any meaningful reorganisation of the left in Irish politics, and to the emergence of strong, intelligent leadership on the left.

None of this is impossible, even starting from such a low base. But it will take enormous stamina, youthful energy, and the ability to create or re-create a specifically Labour vision for the future of Ireland, a vision that will resonate of new rather than old politics. Part of this will also involve building real and effective links with trade unionism as a vital ally in an era of rampant global capitalism.

Part of it should involve a ruthless examination, and appropriate culling, of any local Labour structures that have become rotten boroughs.

There is also one other topic that Labour might usefully add to the list of structural changes in politics, long resisted by all political power brokers but now being advocated by Fianna Fáil, among others. This is the need to address what is one of the fundamental structural problems in Irish politics as a whole: clientelism in all its forms.

It is the handmaiden of the centralisation of power in the executive, and has been, if anything, accentuated rather than minimised by the rule change that prevents TDs from simultaneously occupying local government franchises.

In this context, the transfer of real power – and its attendant responsibilities – away from central and towards local government should also be a prime Labour Party objective.

Edmund Burke, a famous Irish politician of another era (and no socialist, as it happens), once told the electors in his Bristol constituency that as their representative he owed them not only his service, but his judgment. That should be the hallmark, and the mindset, of the next generation of Labour politicians.

John Horgan is a former Labour senator, TD and MEP

1 Murder in a crowded house: The full story of the Patricia O’Connor trial
2 Coronavirus: People in close contact with Belfast patient identified
3 Britain is uncomfortable because Ireland has the upper hand for the first time
4 ‘I had to tell my mum not to say that as it means something else’
5 Storm Jorge on track to hit Ireland amid flood and wind warnings
Real news has value SUBSCRIBE