John Fanning: Campaign advertising – the good, the bad, and the scurrilous

‘With a general election now less than a year away, the referendum ads raise the wider issue of the effectiveness of political advertising’ 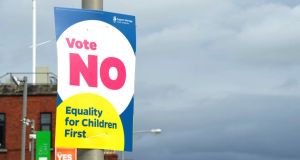 In a recent article about the British general election Armando Iannucci argued there is usually a “designated bastard”, almost invariably on the Tory side, whose job it is to come up with some scurrilous advertising based exclusively on fear and a complete disregard for truth.

They’re usually, though not always, called Saatchi or Saatchi, and this year’s classic of the genre featured a pint-sized Ed Miliband perched precariously on Nicola Sturgeon’s nipple – implying none too subtly that if Ed was prime minister he would be completely in hock to the Scottish National Party.

We do things differently here. Irish political parties tend to avoid the jugular, at least in their promotional material, which makes for more civilised but duller electoral advertising campaigns. But referendums are different: here we do have our very own “designated bastards” and surprise, surprise, they’re all on the side of organisations dedicated to preventing any further expansion of what used to be referred to as “the liberal agenda”.

“Hello divorce, goodbye daddy” is probably the best-recalled example. The fact the passing of that referendum did not lead to the tsunami of runaway dads predicted by those who campaigned against the introduction of divorce hasn’t deterred those who oppose same-sex marriage in the current referendum from employing the same wildly exaggerated fear tactics: “Surrogacy: she needs her mother for life not just for nine months”, accompanied by a photograph of a sad little toddler. Others in the same vein include: “A mother’s love is irreplaceable” and “Vote no: equality for children first”.

In the same way the Tories in Britain ignored many of the real issues facing the country and concentrated divisively on the potential influence of the SNP, the No campaign is trying to substitute a same-sex marriage referendum for a children’s referendum.

With a general election less than a year away, the referendum ads raise the wider issue of the effectiveness of political advertising. Recent books cast doubt on whether advertising has any real influence on the electorate, with a number of Tory officials making the point that even their famous “Labour isn’t working” poster in 1979 didn’t have any effect on Thatcher’s victory – she was going to romp home with a huge majority in any case.

But that doesn’t mean the parties won’t be beating a path to agency doors. If one party employs professional advertising, the others will feel compelled to follow suit, even if it is only to maintain the morale of party workers and canvassers. However, a recent book on political advertising, Sam Delaney’s Mad Men & Bad Men, makes an interesting point about the value of ad agencies to parties: “They focus politicians to get to the heart of their policies, to deliver their key arguments succinctly in a way people can understand.”

Given the febrile mood of the electorate, agencies will have their work cut out no matter how many “designated bastards” they have at their disposal.