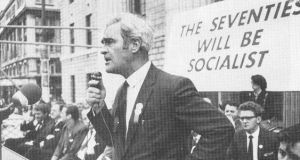 In the 1969 general election, the Labour party under Bredan Corish ampaigned under the slogan “the seventies will be socialist” and it promptly lost four seats.

Thirty years ago Desmond Fennell observed that socialist thought in Ireland was “virtually non-existent”. James Connolly “is still the chief reference source of Irish socialism, with no other Irish thinker intervening” since.

That summation still holds good, as does Fennell’s conclusion that “socialist activism has been confined to the margins”. Since the foundation of the State, the s-word has been a turn-off for the electorate.

In the 1969 general election, the Labour Party campaigned under the slogan “the seventies will be socialist” and it promptly lost four seats. The IRA’s promise to deliver, by violence, a “32-county socialist republic” did little to help the left-wing brand. And while the electorally successful Bertie Ahern proclaimed to be “one of the few socialists left in Irish politics”, voters – understandably – took this as a joke.

Today, socialism continues to play badly at the ballot box. Those politicians who used to canvass under the socialist tag now go by the name Anti-Austerity Alliance–People Before Profit, presumably because they copped on the Irish are more likely to vote against austerity than for an “ism”.

The breakthrough left-wing party of the last general election surely would not have done as well had it been called the Socialist Democrats. (Come to think of it what is a Social Democrat? The opposite of an Anti-social Democrat?)

The theoretical justification for this type of “socialism” was, coincidentally, provided by the German philosopher Axel Honneth at a fascinating lecture at University College Dublin recently. Honneth received UCD’s highest honour, the Ulysses Medal, before delivering a talk on The Ethical Life of the Market which, among other things, suggested political and economic thought in Ireland is severely underdeveloped.

In Honneth’s view, economic markets are already “ethically embedded”, and the only question to settle is to what degree should values – be they socialist, Christian or otherwise – intervene in the marketplace?

Honneth identifies three ways in which the market interacts with ethics (borrowing terminology from economic sociologist Jens Beckert). First, there are ethics which “enable” the market. Recognition of people’s shared humanity, for example, allows business relationships to develop.

Second, there are ethics which “accompany” the market. Consumers make purchases based on tastes and value judgments, and entire industries can be traced to evolving ethical standards.

Third, there are ethics which “restrict” the market. For example, the labour market would not work efficiently unless there were limits on exploitation – such as baseline working conditions, or a maximum working week.

In short, Honneth says, “the market is much more morally demanding than its official theorists would like to believe”. Crucially, “the market requires moral restrictions for the sake of its own functioning”.

From this perspective, gross inequality and labour exploitation can be seen as market failures rather than necessary components of capitalism. Such “moral economism”, as Honneth calls it, pulls the rug from under the Donald Trumps of this world who insist the natural order is social Darwinism.

The economic system we should be aiming for, says Honneth, is “market socialism”, although he might just as well call it “ethical capitalism”.

Either way, we should be setting ourselves the task of imagining what such a system looks like, and taking steps towards its realisation. That means developing a new tradition of socialist thinking – or if you’d prefer humane and socially responsible, capitalist thinking – that goes beyond the extremes of Connolly, on the one hand, and, on the other, those “wealth creators” who claim they should be free to do as they wish.