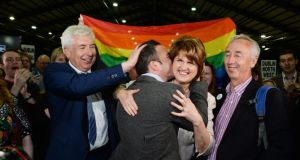 Joan Burton: ‘The children in every town, village and schoolyard who will now grow up knowing their country accepts them.’ Above, Joan Burton with Alex White, left, John Lyons and Kevin Humphreys at the count at the RDS. Photograph: Cyril Byrne / THE IRISH TIMES

Normally when a referendum result goes the way a political party wants, that party would not be shy in seeking credit for it. That’s politics, and it is certainly true that the Labour Party in Government fought successfully to get the marriage equality referendum in the first place, and then fought to win it.

But in this profoundly uplifting campaign, we were only part of a much wider movement – a rainbow movement to help create a rainbow nation.

A movement led, shaped and inspired by so many LGBT people, and their family and friends, who told their stories, who knocked on doors, who fought for every last vote – and who carried the day.

So when I think of this historic vote, I’ll think of the life-affirming Yes Equality campaign, so ably directed by Grainne Healy and Brian Sheehan, and the manner in which they inspired a country.

I’ll think of the courage and bravery of women such as Cork footballer Valerie Mulcahy and TV3’s political editor, Ursula Halligan, both of whom openly disclosed their sexuality for the first time in the simple hope that doing so would help others.

I had the pleasure of sharing a stage with Valerie in Cork and hearing her powerful testimony in person.

Reading Ursula Halligan’s article, meanwhile, was both heartbreaking and inspiring.

“Emotionally, I have been in a prison since the age of 17; a prison where I lived a half-life, repressing an essential part of my humanity, the expression of my deepest self; my instinct to love,” she wrote. “If my story helps even one 17-year-old school girl, struggling with her sexuality, it will have been worth it.”

I’ll think of how Josie Lyons, mum of gay Labour TD John Lyons, captured the hope that the referendum would bring for parents of LGBT children.

“I’d like to know that you’re happily settled . . . that you could marry somebody and you’d have someone with you, someone to look after and love you.”

I’ll think of the fathers, like Fine Gael general secretary Tom Curran, a man of strong Catholic faith, who movingly wrote about his own son coming out.

He quoted the beautiful expression of parental love from Isaiah – “You were carved from the palm of my hand” – and explained why he considered voting Yes to be the moral thing to do.

I’ll think of the Taoiseach, who committed wholeheartedly to the referendum, and the likes of Leo Varadkar and Jerry Buttimer for their own bravery in telling their personal stories.

I’ll think of Fianna Fáil senator Averil Power, who, as an adopted person like myself, strongly pushed back against the negative – and upsetting – messages of the No campaign in relation to adopted children.

I’ll think of former President Mary McAleese, whose passionate eloquence was heard loud and clear. I’ll think of the priests, sisters and nuns who defied the wishes of their Church to vote Yes. And I’ll also think of the Church leaders, who at all times kept the debate respectful, civilised and dignified.

But mostly I’ll think of a woman I met at the Obama Plaza in Moneygall some time back, when the referendum was still in the offing.

My first thought was that she was going to be critical, but instead she told me about her beloved son – her beloved gay son – and her desire that he would have the right to marry and settle down.

And that is the true story of this campaign – the story of the many thousands of members of the LGBT community who may not necessarily have had the opportunity to tell their stories publicly; who may have had to overcome prejudice and abuse, loneliness and fear in their daily lives; who yearned for nothing more than equality, and who fought for that equality, together with their mothers, fathers, brothers, sisters, wider family and friends who love them.

When Eamon Gilmore said in 2012 that the right of gay couples to marry was the civil rights issue of this generation, some scorned such a view, while many more feared Ireland wasn’t ready to agree.

But Ireland did agree, and when I think of this campaign, I will think of the joyous reality that when the time came, this country stood up for its people – all its people – and said Yes to equality.

But most of all, I’ll think of the children.

Joan Burton is Tánaiste and leader of the Labour Party