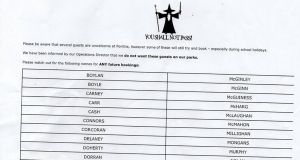 Pontins, the British purveyor of chalet holidays since 1946, has been operating a blacklist of ‘undesirable guests’

Pontins, the British purveyor of chalet holidays since 1946, has been operating a blacklist of “undesirable guests”. O’Connell made the list of 40 suspect names, along with Murphy, O’Brien, Leahy, Gallagher, O’Donnell, Corcoran and Delaney. “We have been informed by our operations director that we do not want these guests on our parks,” said a memo posted on the company intranet, and later published by iNews. There go my holiday plans.

A glance at the Tripadvisor reviews for one of the company’s six holiday parks, Pontins Southport, leaves little doubt about the main appeal of this type of holiday. “WTF do you expect for that type of money, five stars and a concierge? Pontins is a little outdated and possibly not perfectly clean, but it’s extraordinary value for money,” says a five-star review.

“We arrived to what seemed like a prison camp,” begins a more downbeat, one-star review. Even by Tripadvisor’s polarising standards, there are a lot of these. Some are accompanied by photographs or descriptions of the detritus of holidays past, allegedly found lurking on mattresses, on the walls or in shower trays. “Not the right property for you?” asked Tripadvisor cheerfully, after I had spent a desultory half-hour scrolling. I had to concede that the algorithm got it right on this one. Pontins, I’m afraid it’s mutual.

As much as certain Irish people relish the opportunity to feel aggrieved by the merest hint of anti-Irish sentiment in the UK, the outrage over the blacklist among some here felt contrived and a shade hypocritical.

Irish people have always been more comfortable in the role of victimised. Many people here don’t see anti-Traveller discrimination as a problem

It was not the disappointed clamour of people denied a relaxing break in a place where a key takeaway from the online reviews is to pack some cleaning products. Neither was it the justifiable fury of people who genuinely believe we’ve gone back to the days of the “No dogs, no Irish” signs in London boarding houses, even if the British Equality and Human Rights Commission drew that inevitable comparison.

That particular brand of anti-Irish sentiment hasn’t disappeared completely, it’s true. I encountered lingering traces of it when I was travelling in England in 2019 reporting on Brexit. My accent attracted occasional, non-sequitur – to me, at least – references to IRA bombs or terrorism. Sometimes I encountered ignorance about the reality of Ireland’s independence from Britain; other times it was quite the opposite. Once someone demanded of me: “Why, if you’re Irish, are you here?”

But this was something different. The list of 40 names wasn’t about keeping the Irish generally out. A whistleblower told iNews that Irish people calling from Ireland were okay. “If it was an Irish accent and the postcode was for a caravan site or an industrial estate in Britain, then that was a big red flashing light.” This was, of course, about blacklisting Irish Travellers.

It was revealing to see the outcry when settled people with the “wrong” surnames found themselves on the receiving end of the treatment routinely meted out – if rarely quite so overtly – to Travellers in this country. Where is the outrage over the report this week by the Mercy Law Resource Centre that found Irish local authorities are discriminating against Travellers in need of housing or emergency accommodation? Where is the indignation when it is reported that more than twice as many Travellers have contracted Covid-19 as the settled population, or that Traveller life expectancy is roughly that of the general population back in 1945? Or that the suicide rate is six times higher among Travellers, according to a 2010 study?

Pontins may not want to welcome Irish Travellers, but neither do many Irish establishments. Research commissioned by the Irish Human Rights and Equality Commission (IHREC) found that Travellers are almost 10 times more likely to deal with instances of discrimination than the general population and 22 times more likely to face it when availing of some private services. “Travellers have been – and continue to be – subjected to endemic racism, at street level and from the organs of the State,” IHREC said last summer.

In the pyramid of discrimination faced by Travellers, not being welcome at Pontins is probably not at the top. Not when many still struggle to access basic services here

Nobody likes to hear this. Irish people have always been more comfortable in the role of victimised than victimiser. Many people here don’t see anti-Traveller discrimination as a problem. They’re not prejudiced, they’re “just saying”.

Kathleen Lawrence has a Master’s degree in human rights, two jobs – as an educational support worker and a local development officer – and plans to become a teacher. She’s also a Traveller, something she usually tells people as soon as she is introduced to them. “I don’t want to become friends with people, and then down the line when they find out I’m a Traveller, they no longer want to be friends with me. And that happens,” she says.

She doesn’t always say it, though. Sometimes when she’s asked why she doesn’t have a stronger Dublin accent, she says something about moving around a bit as a child. “You have to judge a situation and whether you’re safe in it.”

In the pyramid of discrimination faced by Travellers, not being welcome at Pontins is probably not right at the top. Not when many still struggle to access basic services here. Not when they grow up knowing, as Martin Beanz Warde wrote in this newspaper recently, that less than 3 per cent of Travellers will live beyond 65, a reality that makes you middle aged at 35. Not when they are more vulnerable, just by virtue of their ethnicity, to everything from unemployment to Covid to suicide. Not when, as Warde told Newstalk this week, he struggled to book venues for his comedy tour. “I was getting replies saying that they were booked up for a full year . . . and I’d notice other comedians coming in afterwards.”

We didn’t need Pontins to teach us about anti-Traveller discrimination or about judging an entire ethnicity based on the behaviour of a few. We’ve perfected those arts all by ourselves.