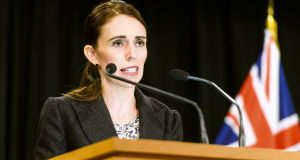 Jacinda Ardern, prime minister of New Zealand, and Theresa May, prime minister of the United Kingdom, are of different generations and different politics. They are leaders on alternative sides of the globe each facing a national crisis but, in terms of leadership style, these two women are on different planets.

When she first heard word of the appalling massacre at mosques in Christchurch, Ardern clearly took a deep breath and immediately adopted a tone and stance designed to confront the atrocity and its implications for her country straight on. She was determined it would not have the effect desired by the perpetrator of dividing the people of New Zealand. She made and communicated a series of important decisions which set the tone for the national and indeed international response.

1 L’Ecrivain, Derry Clarke’s Michelin-starred Dublin restaurant, to close after 31 years
2 Klopp responds to Donegal schoolboy who asks him to stop winning
3 Voting under way in the Dáil to elect the next taoiseach
4 Seán Ó Fearghaíl re-elected as Ceann Comhairle of the Dáil
5 Trump adviser Roger Stone sentenced to three years, four months in prison
6 How much coffee should I drink? How much is too much?
7 How do you know if you are wealthy? It’s not straightforward
8 John McManus: A black swan moment for Sinn Féin?
9 Teenage girl (16) killed in Cork crash named as Kimberly O’Connor
10 Love Island: Since Caroline Flack’s death it has become utterly unwatchable
11 Person claiming to represent ‘ghost ship’ owner comes forward
12 Gardaí investigating four-lane motorway sulky race
13 England coach Eddie Jones apologises after making ‘half-Asian’ comment
14 Six Nations: Ireland v England all you need to know guide
15 Tusla disclosed location of child victim to alleged abuser – report
16 A Russian cruiser with ‘cannibal rats’: What other ‘ghost ships’ could be out there?
17 Ireland wary of Peyper calling the tune as they head for Twickenham
18 Woman sues over catching Legionnaires’ Disease in luxury hotel spa
19 New government will have to confront the need to raise taxes
20 Newton Emerson: Under what conditions would FF or FG share power with SF?
21 Bernadette McAliskey: ‘The North’s economy cannot survive without immigrant labour’
22 Legionnaires’ Disease case: Spas should ‘be alert to dangers in water’, says woman
23 Fund entitled to injunction for possession of south Dublin property, High Court rules
24 John Delaney joined as notice party to watchdog application over FAI documents
25 New direct Dublin to China flight deferred over coronavirus concerns
26 Knock gets visit from world’s largest passenger plane
27 Woman injured by bolting horse awarded €52,500 against neighbours
28 I’m worried about my neighbour’s new ‘shed’ and what he intends to use it for
29 Galway development could transform skyline with 21-storey tower
30 David Brady says he's witnessed illegal payments of GAA managers
31 The Call of the Wild: Harrison Ford in one of his most engaging performances
32 Expert tips: A dentist on how to have perfect teeth
33 High Court overturns permission for height increase in Johnny Ronan apartments
34 Police did not search yard where man accused of garda murder said he had been
35 Wales’ cheating allegations show a lack of respect says France coach Fabien Galthie
36 Two arrested in connection with murder of Keane Mulready-Woods
37 The best places for a family lunch: try these 10 great spots
38 Classic car dealer closes doors on prime Dublin 4 site
39 Green Reit recruits Arthur Cox to help get planning for new cinema
40 Memo to Sinn Féin: Not ‘Southern State’ or ‘Free State’, the name is Ireland
Real news has value SUBSCRIBE