Islam views murder as a crime and a major sin

Muslims in shock since appalling attack on ‘Charlie Hebdo’ in Paris 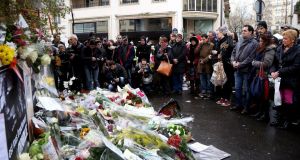 ‘It is important for us at this time of great sadness to stand together and process this horrific incident in a way that is fair and reasonable.’ Above, flowers are left close to the ‘Charlie Hebdo’ offices on a day of mourning following a terrorist attack at the building in January. Photograph: Marc Piasecki/Getty Images

Every Muslim has been in utter shock since the senseless, appalling and cowardly attack on Charlie Hebdo in Paris two months ago. This horrific attack is a complete violation of Islamic law and norms, and the perpetrators are in no way representatives of the Muslim people or the religion of Islam.

God upholds the sanctity of life as a universal principle. “And do not kill one another, for God is indeed merciful unto you,” says the Koran (4:29). Islam views murder as both a crime by law in this world and as major sin punishable in the afterlife as well. The prophet Muhammad said: “The first cases to be decided among the people on the day of judgment will be those of bloodshed.”

This is in keeping with the best of Muslim tradition, which abhors terror and violence. This lesson is best contained in the example of the prophet Muhammad himself, whose honourable birth was celebrated by 1.6 billion Muslims last month.

For Muslims, the prophet Muhammad is the beacon of mercy, the sparkle of compassion, the spring of wisdom and the perfect guide in their journey towards God.

Ironically, the fanatics and extremists right now have reduced the prophetic example to a set of rituals, crooked projections and warped logic that runs counter to the true essence and mission of the prophet.

They ignore the prophet’s example, which is extremely well documented and indisputable. They fail to comprehend that faith is ultimately geared towards inculcating a relationship with God, and that cannot be complete unless humans inculcate the divine attributes of mercy, compassion and kindness and treat their fellow human beings accordingly.

The prophet Muhammad was repeatedly subjected to the worst treatment by his enemies, only to consistently disregard those insults and instead take the path of forgiveness, mercy and compassion.

This is why he is known to Muslims as “the mercy to all worlds”. Indeed, this example is most succinctly summarised in the Koran itself, which instructs believers as follows: “The good deed and the evil deed are not alike. Repel the evil deed with the one which is better.”

The world is sorely in need of such lessons, which represent the authentic teachings of the Koran and the prophet of Islam. It is important to separate these noble messages from those that are bandied about by those who have no competencies in religious interpretation, Koranic hermeneutics or the history of Islamic thought.

Let me be clear by reiterating that Islam is utterly against extremism and terrorism, but unless we understand the factors that provide a rationalisation for terrorism and extremism we will never be able to eradicate this scourge. This must be understood in order to build a better future, which can bring an end to this grave situation that is destroying the world.

However, it was unfortunate to see hasty responses and reactions that immediately jumped on the Islamic faith within minutes of the first news reports of the incident. Blaming an entire religion because of the acts of not-well men is patently unfair and serves no purpose.

It is important for us at this time of great sadness to stand together and process this horrific incident in a way that is fair and reasonable. It is important that we do not demonise Muslims without cause, not because it is good for Muslims but because our future ability to co-exist in peace depends on it.

We are today in desperate need of serious religious leaders who engage with the reality of the modern world, complete with its challenges and difficulties, in order to create an environment in which people can co-exist. This must be a joint effort from members of all faith groups and cultures.

Shawki Allam is the Grand Mufti of Egypt