Is it time to treat Facebook as a traditional news publisher? 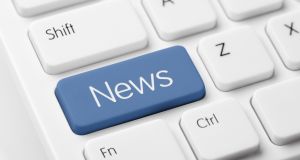 Facebook is now the primary driver of traffic to news websites, having overtaken Google for the first time last year.

More than half of Irish consumers now get their news from social media. This places Ireland in line with international trends, with the widespread use of smartphones going hand in hand with the growth of social media. These findings derive from the Reuters Institute Digital News Report 2016 and highlight a deepening crisis for the global news industry.

With traditional sales and advertising revenue falling, news publishers are forced to share audiences with social- media companies. In particular, the report highlights the influential role of Facebook, with 45 per cent of Irish consumers using the network to find, share, or comment on news. This unprecedented reach presents a number of dilemmas for publishers, consumers and policymakers.

For news publishers, Facebook and other social media are appealing because so much of the audience is already there. Facebook is now the primary driver of traffic to news websites, having overtaken Google last year. Yet, while publishers rely on social media to reach audiences, only 23 per cent of consumers here recognise the publishers responsible for news on social networks.

Consumers value social media for breaking news and easy access to a range of sources. It also allows people less interested in news to come across stories serendipitously. Despite concerns about the potential bias of algorithms, 37 per cent of Irish consumers are in favour of news recommended on the basis of their reading history, compared with 26 per cent for news selected by traditional editors and journalists. At the same time, consumers acknowledge the potential drawbacks of social media “filter bubbles”. They worry about missing out on important information (62 per cent) and failing to encounter challenging viewpoints (61 per cent).

In Europe, competition and plurality policies are likely to play a prominent role. Most European Union member states have replaced media-ownership regulations with competition laws. Last year the European Commission formally charged Google with anti-competitive practices and Germany’s federal cartel office is currently investigating Facebook for suspected breaches of data-protection laws. However, technology firms are likely to strenuously oppose regulation, and there are legitimate concerns that heavy-handed regulation could limit online freedoms.

A third proposal to address the power of technology companies is to make them subsidise traditional journalism. Justin Schlosberg, media lecturer at the University of London, proposes a 1 per cent levy on Google and Facebook revenue to pay for journalism. While appealing to struggling publishers, such levies raise problematic questions about who would oversee the funding and which publishers would be eligible to receive it.

Such moves can also be counterproductive for the news industry. Spain’s new copyright law required Google to pay publishers for each headline and article snippet aggregated on Google News. Google responded by shutting down Google News in Spain. A study commissioned by Spanish publishers found that traffic to small publishers dropped significantly and Spanish news aggregators were forced to shut down as a result of the law.

There is no simple solution to save the news industry. Seismic technological change has transformed how information is produced and distributed, and the news media’s dependency on technology companies is unlikely to change. European efforts to regulate the power of these companies are entangled in wider political and economic interests. Regarding journalism specifically, the deeper question is: what do we want to safeguard – the future of quality journalism or the existing news industry?

1 Susie Dent: ‘Jimmy Carr is incredibly rude to me. I took it as a compliment’
2 Man with electric scooter who died in Meath was due to get married in the coming weeks
3 My friends keep mocking my new boyfriend’s small penis
4 Hospitality industry suffers another blow as New Year’s Eve festival is cancelled
5 Tour de France: Every yellow jersey winner must feel guilty by some association
Real news has value SUBSCRIBE