‘Is it really yourself?’ – On a sentimental journey with Frank Kelly 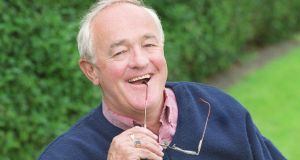 One afternoon in 2002, shortly after my memoir, Believe It Or Not, had been published, I was sitting at home when the phone rang.

“Is that Patrick Semple?”

“My name is Frank Kelly, I’ve just finished reading your memoir and I want to tell you how much I enjoyed it.” Frank went on to say that he had read my account of how during and after the war my family had gone from Wexford to a farm outside Aughrim, Co Wicklow, for summer holidays.

“Would that have been Roches?”

“Yes it was,” I said, “how did you know?” Frank told me that for a number of years during and after the war his family had gone from Blackrock, Co Dublin, on holiday to a farm a mile or so up the road from there. Frank and I shared memories and reminisced about a time and a way of life long gone. There must be dozens of Frank Kellys in Ireland and it wasn’t until towards the end of the conversation that I tumbled to the fact that I was talking to “Father Jack”.

When my second poetry collection was published I asked Frank if he would launch it for me. He readily agreed but at the last minute he found that he had to go into hospital. He was most apologetic, but it was not a problem, and a novelist friend of mine did the honours. However, those who attended with the expectation of meeting “Father Jack” were disappointed.

Subsequently I asked Frank if one day in the summer he would like to take a day out to visit our childhood holiday haunts. He said he would love to, so we arranged a day. I picked him up at 10am on a fine warm May day. We found our way to Aughrim and then to Roches and decided to call.

First a flashback: when my wife and I were engaged we were in the area and I decided I would show her where I had spent childhood holidays. Old Mrs Roche was still alive and with her daughter-in-law received us warmly and produced tea and buns. Suddenly Mrs Roche said to her daughter-in-law, “Bring in Fred”. She went and brought in a baby of two or three months. Needless to say we greatly admired the son and heir who was their pride and joy.

Some 48 years later, Frank and I drove into Roche’s yard. As we approached the back door a tall swarthy fine build of a farmer opened it. I held out my hand and said: “You wouldn’t be Fred by any chance?”

“The last time I saw you, you were only a couple of months old.”

We were brought in and entertained in the kitchen.

They recognised Frank as “Father Jack” and they were delighted we called. When we left we drove into Aughrim and went into the famous Lawless Hotel which neither of us would have recognised from our childhood. In the lounge there were two or three men and a garda, cap on counter, sitting on high stools at the bar. There was a priest at a table having his lunch. We went around the corner and had just sat at a table when one of the men from the high stools approached Frank while I perused the menu. When he went back to the bar, Frank said to me: “Do you know what his opening remark was: ‘Is it really yourself?’.”

We left the village and drove out to Boyd’s, Frank’s childhood holiday farm. We drove into the yard and as we parked, a man opened the back door, and as he approached, he looked at Frank and said, “I know who this man is.” He welcomed us warmly and brought us into the kitchen where we sat to the table, Frank in the place of honour at the top, with the farmer, his wife, his mother and adult son. The Boyds had always known that “Father Jack’s” family had holidayed there when he was a boy.

Our host’s mother left the table and returned with a visitors’ book. In it they found Frank’s childish signature with the rest of his family. They photocopied one of the pages for Frank to bring home to show Bairbre, Frank’s wife.

They showed us, hanging in the hall, two watercolour paintings of scenes on the farm by Frank’s father who had been a more than competent watercolourist.

Then our host took us out into the yard where Frank was able to tell him what each of the outhouses was used for in the old days, the stable, the dairy, the hen house. He then drove us down the farm, and Frank remembered what some of the fields were called. In particular the one he associated with the bull.

We drove home after a wonderful sentimental day out. On the way Frank enquired if I had any more books coming out. I told him I’d have one ready in a few months.

“I’ll launch that for you,” he said, which he did.

Frank was a generous and kindly gentleman.