‘In some cases our report documented, women were left to carry a dead foetus inside them for months, which one woman described as “giving death”, instead of giving birth’ 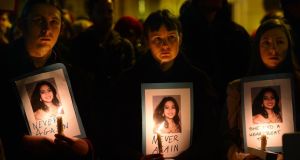 ‘Recent history bears out the cruel injustice and human cost of the current law. Irish people, and people all over the world, were shocked by the death of Savita Halappanavar in a Galway hospital in 2012.’ Above, a protest outside the Dáil about abortion legislation following the death of Savita Halappanavar. Photograph: Alan Betson / THE IRISH TIMES

A few months before the marriage equality referendum, Taoiseach Enda Kenny said that a Yes vote would “send out a powerful message of an Ireland that has evolved into a fair and compassionate and tolerant nation.”

The Yes vote was a wonderful moment for Ireland, but as long the country’s restrictive abortion law remains unchanged, the country will be neither fair, compassionate nor tolerant to women.

Unfairness, inequality and discrimination are inherent in Ireland’s 2013 abortion law, which criminalises a medical procedure only women and girls use, and a constitutional amendment that forces medical staff to prioritise the survival of the foetus, putting the health and life of women at risk.

Recent history bears out the cruel injustice and human cost of the current law. Irish people, and people all over the world, were shocked by the death of Savita Halappanavar in a Galway hospital in 2012.

Savita’s story haunted the women Amnesty International has spoken to.

One woman, Lupe, arrived bleeding at the very same hospital just three months later. She says when she arrived staff refused her an abortion despite the foetus showing no signs of life. She was repeatedly told she needed another scan, even though, numerous scans showed plainly that there was no foetal heartbeat.

After carrying a foetus with no heartbeat for 14 weeks, she travelled to her native Spain where doctors were shocked at how she had been treated. She was taken into emergency care and given an abortion she should have been given in Ireland.

In some cases our report documented, women were left to carry a dead foetus inside them for months, which one woman described as “giving death”, instead of giving birth.

Ireland’s laws and institutions show little compassion for the 4,000 women who are essentially exiled each year. They often have to bear the considerable mental, financial and physical burdens alone.

Women spoke to us of the fear they felt at travelling for having a procedure which is criminalised and carries a 14-year jail sentence in Ireland. They all spoke of the lack of support and loneliness they felt by having their health care system turn their back on them and the isolation they feel when they return.

Far from being tolerant, the Irish State takes away the autonomy and dignity of women and girls, including those who cannot travel: the poor, asylum seekers lacking paperwork, those who live in remote areas or are too unwell to travel. It censors any doctor or counsellor who would try to help or advise, forcing them to withhold not just essential treatment, but even complete information and advice about that treatment. They certainly cannot refer them to abortion services, which would be commonplace in any other country. The law thus compromises the relationship between doctor and patient.

In 2009, Nicola learned her foetus had no chance of survival but staff told her that termination of pregnancy was not allowed. Unable to afford the cost of travelling abroad, she went to the hospital every week for a scan, and only received treatment several weeks later after medical staff confirmed that the foetus had died.

If Ireland wants to comply with international law, Ireland must change its law. It must stop making women criminals, stop the censorship of information about abortion, and, at a bare minimum, start ensuring access to abortion in cases of rape, incest, for both fatal and severe foetal impairment or where a woman’s or girl’s health is at risk.

Around the world, Ireland is seen to be a champion for human rights, but that jars utterly with its regressive abortion regime. It is tragic to see Ireland so behind on its domestic women’s rights record when it has done important work on global human rights issues including tackling gender-based violence in conflict.

This is clearly a difficult debate for Ireland. Around the world, I have spoken to people who are resistant to change. And yes – people who oppose abortion have a right to their beliefs, but human rights clearly require that they cannot control the bodies and beliefs of others.

One woman told us she hopes to see Ireland provide safe and legal access to abortion in her lifetime, so that her daughter, when she is older and she needs to have an abortion, doesn’t need to travel to the UK in secret and in silence.

With the Marriage Equality referendum, the Irish people began to dismantle the architecture of homophobic discrimination that had imprisoned so many for so long. Now it needs to do the same for women.