Ireland is not ready for its post-Brexit future 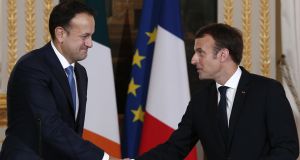 When Brexit happens and Ireland loses its closest ally in the EU, Dublin’s relationships with its continental partners will be of far greater importance. Photograph: Kamil Zihnioglu/AFP via Getty

At a reception at the Irish embassy in Paris in 2011, I met Michel Sardou, a French singer whose hokey 1981 ballad Les Lacs du Connemara (The Lakes of Connemara) is largely to thank for a generation of French tourists’ fascination with the west of Ireland. He was there to receive the “Freedom of Connemara”, a wheeze concocted by local businesses for celebrities who promote the area.

Sardou, an affable man who still sells out venues across France, seemed to be in on the joke. He had never even visited Ireland when he wrote his hit song, he confided. He plucked the place names from a tourist brochure and the rest was inspired by John Ford’s The Quiet Man. The result is soaring gibberish. A woman named Maureen jumps naked into one of the eponymous lakes. For reasons unknown, her fellow protagonist Seán declares himself a Catholic. There are horses, dark clouds, lots of rain and even some Cromwell.

You still occasionally hear Les Lacs du Connemara at French weddings. But it fulfils another useful contemporary function, as a metaphor for Franco-Irish mutual incomprehension. It’s two-way traffic: Sardou’s ballad has its equivalent in the tired clichés that frame Irish views of the French. Given that the two countries are near neighbours, with histories that often entwined and flows of people and goods constantly moving between them, it’s striking that their perceptions of one another are still so one-dimensional.

Ireland’s lack of curiosity is more striking, and ultimately more of a problem. It’s the smaller of the two countries, and one whose self-image is that of an outward-facing cosmopolitan who moves easily between cultures. Its huge dependence on trade, tourists and foreigners’ goodwill gives it more of an interest in understanding the neighbourhood than is true of France, whose diplomatic and economic clout afford it a different view of the world.

Yet Ireland, for so long in the shadow of another neighbour, remains cocooned in a linguistic bubble that makes strangers of its friends. Witness how Paris and Dublin speak at cross-purposes on corporate tax, unable to grasp where the other is coming from. Substitute France for Germany or Italy or Spain and the diagnosis remains the same.

This matters more than ever. When Brexit happens and Ireland loses its closest ally in the EU, Dublin’s relationships with its continental partners will be of far greater importance. The UK’s departure will force Ireland to decide whether to follow it towards the European fringe or to effect a strategic reorientation that places it at the heart of the project. To most Irish people, there’s only one answer to the question. But it’s a huge task that will take generations to complete.

A few months ago, the Department of Foreign Affairs published a useful six-year “strategy for France”. It’s full of good ideas, from promoting French in the public service and re-energising the town-twinning scheme to expanding the presence of Irish agencies in France. The plan stresses the “thriving” political-economic ties, the “stronger than ever” links between the countries’ peoples and the place of culture “at the heart of our connections”.

That’s all true – and what else could a public document written by diplomats say – but the striking thing about the relationship is not how close it is but how under-developed. Trade and tourism are growing, but to all intents and purposes, France is still an emerging market for Ireland. If anything, given France’s size and proximity, the number of Irish companies active there (400) and the headcount of Irish people who call it home (20,000) are very low. The strategic plan refers coyly to “some challenges” and notes that “we need to tell the story of modern Ireland more clearly in France”.

If anything, Ireland’s ignorance is greater. That’s partly down to cultural dynamics – many Irish people’s information about the continent is mediated through British media, with its own biases and blindspots. But it’s a problem that is compounded by a chronic failure to learn other people’s languages. Paradoxically, a tool – English – that supposedly underpins Ireland’s global ambition is also responsible for narrowing its field of vision.

Fixing that is about to become a national imperative, but a political-cultural shift of this scale will require a huge effort, at once imaginative and practical. More than three years after the Brexit referendum, the discussion has barely even begun.

In Britain, we have an example of a country whose failure to adapt to EU membership left it in and out, marooned by its own ambivalence until, eventually, something had to give. How’s that working out?

1 Child (4) died of viral infection following nap at Cork creche
2 Asylum claims by Georgians and Albanians brought to abrupt halt
3 Fresh delays and millions in extra costs for children’s hospital revealed
4 Miriam Lord: Does anyone care if Leo smoked or snorted?
5 Hilary Fannin: What I wish my spouse and I had done the morning of our wedding
Real news has value SUBSCRIBE