Ireland has an important role to play in challenging Chinese abuses 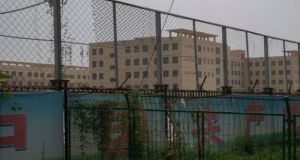 Chinese telecoms giant Huawei is in the news after the UK declared that it would remove it from its 5G networks by 2027, because of fears that it is too close to the Chinese Communist Party and therefore poses a security risk.

In October 2019, Huawei transferred many of its mobile software services from China to its Dublin-based wholly-owned Irish subsidiary, Aspiegel Ltd. Huawei announced that it would invest €70 million in research and development in the Republic over a three year period. Meanwhile, Irish telecom companies continue to utilise Huawei technology and third-level institutions have important links to the Chinese company.

China has become increasingly important economically to Ireland. From modest beginnings in 1979, when bilateral trade was only worth €4.5 million, it grew to €14.18 billion in 2019. China is now our fifth largest trading partner.

Is criticism enough? Does Ireland need to do much more, especially now that it has a much-coveted seat on the UN Security Council?

The Covid-19 pandemic showed our vulnerability as a small, globalised, open economy, both in terms of supply chain security and damage to some of our most important agri-business and pharmaceutical companies.

Given that vulnerability, it could be seen as brave that Ireland was one of just 27 countries which criticised China’s national security law, which effectively ended Hong Kong’s relative autonomy.

But is criticism enough? Does Ireland need to do much more, especially now that it has a much-coveted seat on the UN Security Council?

China’s ruthless enforcement of cultural uniformity gave rise to a telling headline in the Washington Post last November - “In China, every day is Kristallnacht.”

Written by Fred Hiatt, editor of the editorial page, it details the persecution of the Uighur people, a Muslim ethnic minority who are suffering in myriad ways. Generally, responsible journalists steer away from comparisons with the Nazis, and not only because of Godwin’s Law, which declares “as an online discussion grows longer, the probability of a comparison involving Nazis or Hitler approaches 1”.

But China’s abuses of human rights are such that it is understandable why Hiatt would choose the analogy. Not least, perhaps, because his grandfather was actively involved in the resettlement of European Jews in the United States after the second World War.

Kristallnacht refers to the night of broken glass when hundreds of Jewish synagogues, cemeteries and businesses were attacked or destroyed. In China, there is a systematic campaign to destroy Uighur mosques and cemeteries, and indeed, religious imagery of any kind.

It is not just Uighurs, even though their persecution is the most obvious. No religious organisation is safe

The Inter-Parliamentary Alliance on China (IPAC), an international cross-party group of legislators, has stated that “the Uighur people and other predominantly Muslim minorities in the Xinjiang Uyghur Autonomous Region, China, are enduring intolerable, state-sponsored persecution.”

What is happening in China’s northwest province Xinjiang is denied by Chinese officialdom. However, organisations as diverse as IPAC, Human Rights Watch, and Bitter Winter – an Italian magazine which focuses on human rights and religious liberties – have all raised the alarm about what is happening there.

China operates so-called re-education camps which force people to learn Mandarin, deny them the right to practise their religion and allegedly engage in compulsory sterilisation and abortion. People have been arrested and sent to these camps simply for wearing a hijab, or having an additional child. There are claims that many of those who have been interned are now being used instead as virtual slave labour.

Uighur women are forced into marriages with majority Han Chinese, in another attempt to wipe out their culture. Even homes are not safe. An obnoxious practice known as the “Be Family” programme means that Communist party members can move into Uighur homes in order to supervise families.

And the China Cables released by the International Consortium of Investigative Journalists detail a surveillance system so extensive that it rivals dystopian fiction.

It is not just Uighurs, even though their persecution is the most obvious. No religious organisation is safe. Bitter Winter (bitterwinter.org) has catalogued abuses of Buddhists, Taoists, and Christians of every persuasion. No crosses or religious imagery are allowed on churches. Christians have been tortured and killed and denied already pitiably small state subventions if they persist in their faith.

There are fears that the Vatican’s attempts to engage with China to regularise the position of underground Chinese Catholics are at best naive and at worst, a betrayal of brave people. It would help to resolve these allegations if the Vatican would publish the text of the Vatican-China agreement before it is due for renewal in October 2020.

The EU also needs to step up. German chancellor Angela Merkel’s policy of “change through trade” is no longer tenable. In fact, it appears that the increased economic activity with the West has only emboldened China.

And while some might point to China’s easing of the brutal one-child policy everywhere except in Xinjiang, it did so only because it saw the writing on the wall heralding demographic disaster both in terms of gender balance and an ageing population.

Ireland cannot act alone but even in these terrible economic times, it now has an unprecedented opportunity to influence both the EU and the UN. The UN is a profoundly flawed organisation but Ireland could support calls by UN special rapporteurs to begin a process of holding China to account. Ireland has an important role to play.