Inviting the British back to the GPO

In 1922 an IRA unit in Co Cork kidnapped a British general. What happened next shows mutual respect between the two sides, writes the grand-daughter of one of the IRA volunteers. It’s a quality we shouldn’t forget in our 2016 celebrations 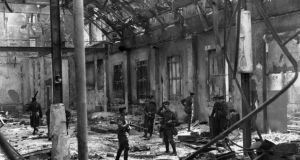 Razed: inside the GPO in 1916. Photograph: Hulton/Getty 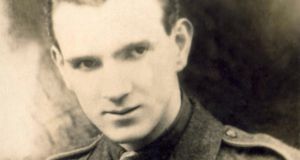 On June 26th, 1922, on the banks of the Blackwater, a man called George Power of Fermoy in Co Cork ordered a Gen Lucas of the British army to put his hands up. According to Power’s witness statement, Lucas “hesitated for a moment but, dropping his fishing rod, he complied. He allowed himself to be disarmed and marched back to the lodge”.

Back at the fishing lodge two other prisoners whom the IRA had also taken that afternoon on the riverside were identified as Col Dunford of the Royal Artillery and Col Tyrrell of the Royal Engineers. So concluded the first part of an ambitious plan by Cork No 2 Brigade of the IRA to capture the most senior British officer in Fermoy. The brigade hoped to use the hostage to secure the release of their comrade Michael Fitzgerald, who was on hunger strike in Cork jail.

George Power was my maternal grandfather. A striking figure of a man, 6ft 4in tall, he joined the Volunteers in 1917. He died in 1966, when I was four, so I have only hazy memories of him. But the story of his involvement in the capture of Gen Lucas was one I heard over and over in my childhood, and it always finished the same way. My grandfather was always quoted as saying that, when he was freed, Gen Lucas had said, “I have been treated like a gentleman by gentlemen.”

This rather charming story, along with a sepia photograph of George resplendent in his military uniform, was very appealing to an impressionable youngster.

In my mid thirties I married an Englishman, and as we embarked on a future together old George came back to my consciousness. My brothers used to rib me for marrying a Brit, telling me that our grandfather would be spinning in his grave. But we all knew he would not.

Finding himself on the losing side of the Civil War, George took himself off to London, where he reacquainted himself with a girl from Fermoy, his hometown, whom he then married. Their first two children, who included my mother, were born in England. The family returned to Ireland only at the outbreak of the second World War, so George would have had no issue with my marrying a Brit.

But I became consumed by a desire to make my husband appreciate how important the cause of Irish freedom was. I was almost evangelical in my zeal not just to educate him about our fight but also to have him really understand it.

My husband was familiar with the story of George and the capture of Gen Lucas. But in the back of my mind I wondered if I had been passed down a sanitised version. Recently I embarked on some independent research to find the answer. This led me to my grandfather’s witness statement. George takes up the story of the kidnap.

“It was now necessary to remove the captured officers well away from the Fermoy area without delay, as it was realised that the reactions to this incident might be swift and far reaching. It was decided to use, as well as the Ford car in which we had travelled, the British officers’ large touring car, for which a volunteer driver was quickly found . . . Seán Moylan and I would drive with Col Tyrrell in the Ford car, and Liam Lynch with Paddy Clancy would accompany Gen Lucas and Dunford in the other.

“For a time all went well . . . We were approaching the main Fermoy-Cork road near the village of Rathcormac and the Ford had temporarily lost contact with the second car.”

At this point Lucas and Dunford held a brief conversation in a strange language, subsequently discovered to be Arabic, and, at a prearranged signal between them, they sprang on Lynch and Clancy. In the melee the driver lost control of the car and crashed into the ditch, losing consciousness.

The struggle between Lynch and Lucas was particularly severe, as both were strongly built, well-trained men, each about 6ft tall. Lucas had got on top of Lynch, frantically trying to wrench the gun from him. He had all but succeeded when the door of the car gave way. They rolled on to the road, still struggling, until Lynch finally wore down his opponent and the general shouted, “I surrender.”

Dunford and Clancy were still fighting when Lynch shouted to the British officer, “Surrender, or I shoot.” Ignoring the order, Dunford was shot and injured.

When my grandfather arrived at the scene, he said, “we saw the big touring car lying almost in the ditch, with the driver still unconscious at the wheel. Nearby, on the grass verge, Col Dunford was lying in a pool of blood, with Gen Lucas bending over, giving him first aid, while Lynch was attending to Paddy Clancy.”

It was decided to release Col Tyrrell, so he could help his wounded comrade, and the volunteer driver was dispatched to Rathcormac for a doctor. George, along with the IRA men Lynch, Moylan and Clancy, would continue in the Ford with Lucas.

The kidnap made headlines around the world – and was a huge embarrassment for the British.

Gen Cuthbert Henry Lucas, when he arrived in Ireland, was a decorated officer who had served in the Battle of the Somme during the first World War. He came from a privileged background and had led a life that was diametrically opposite to that of my grandfather in north Cork. He was given the posting in Ireland as a chance to recuperate from the exertions and horror of the Great War.

Not all stories from the Rising or War of Independence are as full of mutual respect and humour as that of the kidnap of General Lucas seems to be. But it illustrates that freedom was the goal; defeating the British was just a means to that end. It was a strike for the vision, so beautifully articulated by Robert Emmet, of Ireland taking her place among the nations of the world.

And so it feels right to me that the nations of the world should witness our commemoration in 2016 – and that includes Britain.

1 Who are Ireland’s 17 billionaires?
2 Election 2020: FF edges ahead of FG as SF surges in new Ipsos MRBI poll
3 Gardaí suspect botched murder attempt was bid to avenge Mulready-Woods death
4 Rob Delaney: ‘As my career took off, my son got sick ... And then he died’
5 Fintan O'Toole: Safety-first politics has had its day
Real news has value SUBSCRIBE