Independents a better bet than the Greens 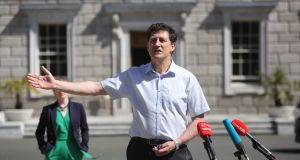 Anyone who thinks that it is going to be easy to be in government in Ireland over the next five years should think again. Every day is going to be very, very difficult from the first day in office to the last.

It is against that background that the Greens must judge the invitation from Fianna Fáil and Fine Gael to join in a coalition. Harking back to Mary Harney’s famous advice to John Gormley that the “worst days in government are better than the best days in opposition”, the Greens will remember what happened to them then.

It is easy to argue that climate policy changes cannot wait five years. Having pinned their electoral colours to the “climate emergency”, it will be very difficult to explain how their 12-seat mandate justifies doing nothing constructive to address that emergency for five years.

But, on the other hand, a new government will be duty bound to take very unpopular decisions from the get-go. And the history of electoral retribution for minority parties in Irish coalitions is hardly inspiring, as I well know.

In addition to the obvious immediate dilemma posed for the Greens, they face an internal cliff face which they must scale in order to join in a coalition. The matter must be put to their ordinary card-carrying membership for ratification and two-thirds of the party members who vote on it must support going into coalition.

That is a very difficult obstacle to entry into government. The policy content of a coalition deal also needs to be acceptable to their putative coalition partners whose TDs outnumber the Green TDs by more than five to one.

The red-line issue of reducing greenhouse gas emissions by 7 per cent annually has already run into difficulties. Greens will be sceptical of a counter offer to achieve an “average” reduction of 7 per cent over 10 years from partners in a five-year government. That looks like an almighty fudge and sounds like the clanking of a can being kicked very far down a bendy road.

Even Fine Gael has propounded a 10-year target of one million electric cars for 2030. Does that sound even remotely likely? Did it ever? Where are the resources now to come for a transformation of our energy infrastructure to reduce emissions by 70 per cent over that same period.

Micheál and Leo would be better advised looking to the centrist independents, none of whom wants an early election or a short-term Dáil

As it is, the Government is pursuing a major increase in energy-gobbling data centres. We are collectively in dishonest denial about the fact that we will need fossil fuel in the form of gas for the next 30 years on any scenario. Even if our hills and seas are planted thickly with wind turbines, we will need a gas or nuclear energy fall-back to ensure that our society can function.

Retro-fitting homes to make them more energy efficient requires huge resources – human and financial. And remember, Richard Bruton has already committed us to planting 440 million trees over the next 20 years – 11 million trees every year or 42,000 trees every working day. Who will pay for that?

We need resources in the form of taxes to pay for social services, including health, housing, and education. Where will the taxes come from?

We don’t live in a North Korean command economy where our “beloved leader” can send students, peasants and soldiers out to execute plans for housebuilding, afforestation and home insulation.

The capitulation on gradually raising the pension age is indefensible; it means the working population will have to support an ever growing healthier and long-living retired population. It is dishonest politically and economically.

Restoring the public finances and rebuilding the employed sector is our short-term priority now.

I doubt that the Greens will accept economic realities. I doubt that Fianna Fáil and Fine Gael will accept anything like what will be needed to win the support of two-thirds of the Green party members. Their deputy leader, Catherine Martin, is already installing herself on the moral high ground – or is that the grassy knoll?

Greens will be tempted to stay out, thinking that an FF-FG government dependent on independents will not last five years and that Sinn Féin would make more plausible coalition partners sometime in the next 24 months.

Micheál and Leo would be better advised, I think, looking to the centrist independents, none of whom wants an early election or a short-term Dáil. There are 10 of them who would do a five-year deal to save the country from the current economic emergency. They would be more pragmatic and less inclined than the inexperienced Greens to panic and pull the plug in the face of opinion poll setbacks.

Yes, the numbers would be tighter. But with an opposition member as ceann comhairle and judicious appointments as leas ceann comhairle, ministers, and chairs of committees, tight Dáil numbers could focus the mind and give us a coherent , determined and ideologically compatible government for five years. That is what we need.