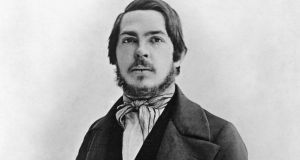 Friedrich Engels: his relationship with a second-generation Irish working-class woman had a profound influence on his life and work. Photograph: Ullstein via Getty Images

Did you know that the favourite meal of Friedrich Engels, who was born 200 years ago this month and who is well known as the co-founder of Marxism and co-author, with Karl Marx, of The Communist Manifesto, was Irish stew? This might seem like a trivial detail but there is an intriguing reason behind it because a second-generation Irish working-class woman lived with Engels for 20 years before her premature death, and had a much more profound influence on him than a merely dietary one. Her name was Mary Burns.

Engels, from a wealthy Prussian background, arrived in Manchester in December 1842 to manage a factory there part-owned by his father; the real motive for his being sent was his parents’ anxiety to shelter him from the attentions of the Prussian police as he had already become converted to radical politics.

There he met and fell in love with Mary Burns, with whom he covertly lived for the rest of her life.

We have few details about her life; like all of those from a similar humble background, she left few traces behind, yet she had a substantial influence on some of Engels’s major works.

Manchester in the 1840s was probably Britain’s most industrialised city and also the one with the most terrible working-class living conditions. Life expectancy there was a mere 28 years.

Mary Burns was born in September 1821, whether in Deansgate or Salford is not clear, the elder of two daughters of Michael Burns or Byrne and Mary Conroy, who had emigrated from Tipperary.

She probably first went to work in a cotton factory around the age of nine. Her mother died in 1835 and her father remarried. Mary and her sister Lydia (Lizzie) probably spent a period working as domestic servants after that, perhaps due to difficulties coming to terms with their new stepmother.

It is unclear where she first met Engels. There is some speculation that she might have worked as a prostitute for a time and that that was how she met him. His correspondence indicates he had quite a few affairs but he and Mary remained a couple for the 20 years after they met, until her death.

He was researching Manchester working-class conditions and she would have shown him around some of the city’s worst slums; one such area that he describes in graphic detail was known as “Little Ireland”.

His book The Condition of the Working Class in England (1845) exposed the appalling circumstances in which workers lived and laboured in Manchester and other English cities.

Engels returned to Germany in the mid-1840s and spent time in Paris and Brussels. He supported Karl Marx financially and co-operated with him in research and writing. They jointly published The Communist Manifesto in 1848 which famously called upon the workers of the world to unite, telling them they had nothing to lose but their chains.

After taking part in the revolution of 1848/49 in Germany, Engels returned to England. He now lived with Mary in a more formal arrangement; they seem to have set up home together (although he maintained his separate gentleman’s lodgings elsewhere in the city) and Lizzie seems to have moved in as housekeeper. The exact living arrangements are hard to establish as he ordered almost all the personal letters he wrote during this period to be destroyed after his death.

The Burns sisters were also fervent Irish nationalists and Mary travelled with Engels on his brief tour around Ireland in 1856. This was just a few years after the Great Famine had devastated the country and Engels was shocked to see how dreadful some of the living conditions were and how the after-effects of the catastrophe were still so widespread and enduring.

Mary Burns died suddenly in January 1863, perhaps from a heart attack, perhaps a stroke; she was only 41, her premature death no doubt caused by the harsh conditions of her early life.

Engels subsequently lived with Lizzie and married her just before her death in 1878 but it seems doubtful that that relationship was as passionate as the one he had had with Mary.

In dedicating his first book to “the working classes of Great Britain”, Engels wrote: “I wanted to see you in your own homes, to observe you in everyday life, to chat with you on your conditions and grievances, to witness your struggles.” Had he not met Mary Burns, it is extremely unlikely he could have fulfilled any of those aspirations.