Glory and folly – An Irishman’s Diary on the Wellington Monument 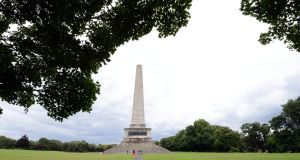 When Nelson’s Pillar on O’Connell Street was blown up in 1966, a group called Go Lucky Four had a hit with Up Went Nelson in Old Dublin. And when the equestrian statue of Field Marshal Gough in the Phoenix Park was blown off its plinth by a bomb in 1957, Vincent Caprani composed a memorable – if somewhat scabrous – piece of doggerel (modelled on Robert Service’s The Cremation of Sam McGee) called Gough’s Statue.

However, another Phoenix Park monument, that to the Duke of Wellington, which had been unveiled a little under 20 years before the Gough one, is still there and its foundation stone was laid 200 years ago on June 17th.

Interestingly, the Wellington Column, in Trim, Co Meath, had its first stone laid only about seven weeks later, on August 7th.

There has been some debate about whether the Phoenix Park obelisk should properly be called the Wellington Monument or the Wellington Testimonial (the latter because the person being honoured was still alive when it was begun). Both descriptions are probably correct in that the Iron Duke was alive when the construction work began but he was dead before it finished.

A testimonial committee was formed in Dublin on July 20th, 1813, on the initiative of the Earl of Roden with the intention of marking Wellington’s military successes during the Peninsular War. His continuing military success and particularly the victory over Napoleon at the Battle of Waterloo in 1815 meant that public (at least a certain section thereof) enthusiasm existed and this could be harnessed to raise the necessary funds. But it seems that the enthusiasm had abated by the early 1820s because, due to lack of funds, the monument was completed only in 1861, nine years after the duke’s death.

The original site was to be Merrion Square (Wellington was most likely born at 24 Upper Merrion Street – now the Merrion Hotel – but this has been disputed); opposition from the square’s residents caused the site to changed to the Phoenix Park. The London architect, Sir Robert Smirke (1781-1867), designed the obelisk; as architect to the Board of Works, he designed many major public buildings, most notably the main block and facade of the British Museum. Plans for a statue of the Duke of Wellington on horseback were abandoned because of lack of funds.

The monument is made of a particularly hard and crystalline form of Irish granite, known as Kilgobbin granite, and at 62 metres (205 feet), it is the tallest stone obelisk in Europe and the second tallest in the world; the Washington Monument, at 169 metres (555 feet), is considerably taller.

Around the base of the monument are four bronze plaques cast from cannon captured at Waterloo. Three of them are bas-reliefs, with pictorial representations from Wellington’s career. One is the “Battle of Waterloo” (by Thomas Farrell), another is entitled “Civil and Religious Liberty” (by John Hogan) and the third the “Indian Wars” (by Joseph Kirk). The fourth plaque has an inscription, in Latin and then in English: “Asia and Europe, saved by thee, proclaim /Invincible in war thy deathless name,/Now round thy brow the civic oak we twine/That every earthly glory may be thine.”

Christine Casey, in The Buildings of Ireland: Dublin (2005), describes the monument as “formidable but rather dreary”. Frank McNally, chief writer of this column, would agree. On September 3rd, 2009, he called it a “vertiginous folly” and complained that “even the steps at the base . . . are sloped, as if to deter the public”. He thought it could be made more attractive by the addition of “a tastefully designed wrought-iron spiral staircase on the outside leading to some sort of platform near the summit”.

He returned to the subject on November 28th, 2014, referring to the obelisk as “that giant phallic object”. He further opined that the “dour monument suits its subject” and pointed out that a speaker in the House of Commons in 1860 dismissed it as a “gigantic milestone ... in defiance of all rules of art and taste”. He found it unforgivable for such a tall object that it cannot be climbed, and again he advocated a spiral staircase leading to a viewing platform, “or a glass lift, luminous at night”.

The 75ft Corinthian column in Trim didn’t take 44 years to complete but was unveiled in 1817 (some claim Trim as Wellington’s birthplace; he spent much of his childhood in the nearby Dangan Castle and was MP for the area). Thomas Kirk, who designed the statue on top of the column, also did the one on top of Nelson’s Pillar in Dublin.